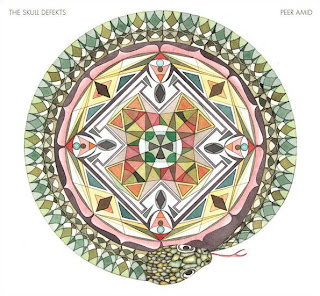 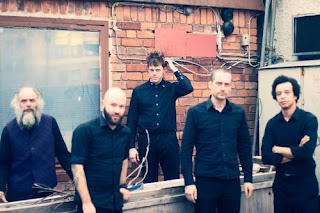 As with any normal person, the magic and charm of listening to a certain style of music wears off the more you listen to it. Being brought up around metal, I think it was quite a logical step for me to make to want to explore other territories of music, noise rock being one that's fairly new to me. From the few bands that I've heard, I am impressed by the raw approach to it as well as the experimental nature of the groups I've listened to thus far.
Right from the start this thing is engaging and interesting. The title-track, Peer Amid, serves up a great slab of syncopated, noisy rock that just brings so much, in terms of sound, to the table. There's something about this song, really the entire album, that has this very hypnotic effect, I enjoy the very tribal drumming throughout the disc, though I've heard others say it ruins it for them, I find it to really enhance the album. The bass work on here is really good too, in my opinion it really keeps the band locked into hypnotic grooves. The band's flirtations with drone music also come out on here as well, with Fragrant Nimbus really throwing out any sort of preconceived idea at trying to make a song catchy, this isn't a drone song though, there are just elements of it in there.
The band do still have their pop sensibilities showing through on here though, so it's not all left-field sounding noise rock. Tracks like No More Always or Join The True really have a simplified, for them anyway, structure which doesn't deviate too much from a straightforward pop song; but even these songs bring in some interesting sounds, background chanting, metallic crashes, and odd synthe lines all going on behind the main instrumentation. If you're looking for the band at their weirdest, on here, The Silver River is what takes the cake with the tribal drumming going on under everything from surf rock riffs, white noise and feedback, metallic scratching, and vocal moaning.
Overall, it's an odd album, one that isn't that easy to really get into, entirely anyway. There are some moments on here where the band totally check all the boxes in terms of being catchy and different while others feel like experiments than actual songs, but take what you will from it. If you're into experimental rock, or noise rock, definitely look out for this one.
Overall Score: 7.5
Highlights: Peer Amid, What Knives, What Birds, Hidden Hymn
Posted by maskofgojira at 7:15 AM