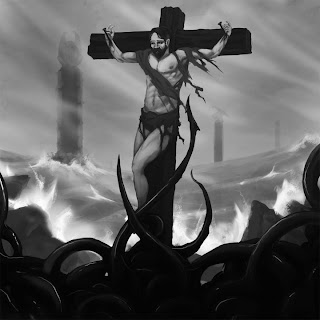 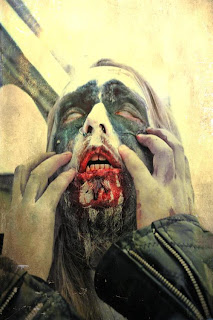 I'm sure by now, most of the people who come to this blog are familiar with Lord Theynian and his project Dødkvlt, but maybe not Goats of Doom. I was recently introduced to them through Theynian and this split. I have to say that I'm glad I have been given the chance to review this split, as it definitely is something different from the usual albums and EPs that I usually review.
So, what does Theynian bring to the table with his three songs for this split, well you have his trademark melodic black metal sound being moved into another new sound. While his full-lengths have experimented with everything from progressive metal to symphonic metal to thrash metal, this new album takes his sound into the realms of doom. Tracks progress in a fairly melodic fashion, but make a point to bring in a more atmospheric touch to the slowed down portions of a track like Prophecy. While his tracks flirt with doom, I'd still call a black metal sound more than a doom one. While I enjoy all three tracks, I found that on a track like Dusk, where he utilized softer passages along with the typical heavier ones, it worked in his favor and made that song the standout in my opinion. 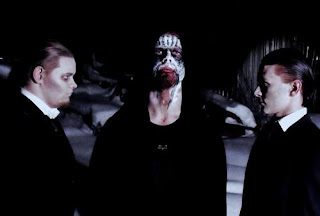 Being my first encounter with GoD, I was quite pleasantly surprised with not only their sound, but the songs they contributed, which in essence could be interpreted as the same thing. What you get is a similar style to Dødkvlt's melodic black metal foundation, but like Theynian's more experimental tendencies, GoD have a more exploratory nature to them as well. Making use of tribal drumming, choral chanting, acoustic guitars with folk instruments, and other sounds that aren't usually found within straightforward black metal. There's always something different going on in each one of the four tracks they present to this split. I couldn't help but feel that GoD's material presented itself as more experimental than Dødkvlts on here, what with tracks like Vainoaja Pimeydestä and Julistus really bringing fresh ideas to the table with their mixture of folk and symphonic.
Overall, this is a really solid split with great songs from both artists. While I'm aware the Lord Theynian is currently working on new ideas for a new Dødkvlt album, I can only hope that Goats of Doom will release a full-length soon. If you're into modern, experimental black metal, don't wait to check this out.
Overall Score: 8
Highlights: Dusk, Vainoaja Pimeydestä, Riivaaja
Posted by maskofgojira at 10:04 AM