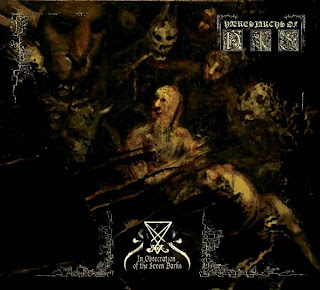 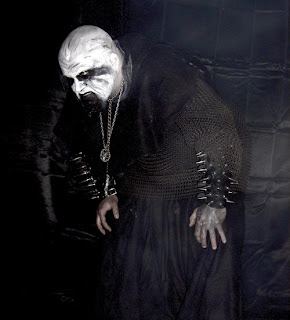 Last year, near the end of it anyway, I kept reading praises of an album called "Denuntiatus Cinis" by a project called Hæresiarchs of Dis. It took me a little while to finally find the album, but once I did, I understood the hype behind it. This is the follow-up to that release, just a year later, less than I think.
This album reprises a similar sense of depravity that the last one did, with a torturous atmosphere that really brings a sense of ambiance as well as claustrophobia. It's black metal, atmospheric mind you, but still very hard-hitting, abrasive sounding black metal. I honestly love how uncaring this thing presents itself being, a track like Remembrance of He Who Defied God mercilessly bulldozes everything aside with it's constant shifting and rotating speeds. Now, when I say it's brutal black metal, don't mistake that for me saying that it's constant blast-beats and going full-throttle all the time, because there are more than a few slower moments on here as well.
I have to warn you that this album does have a weird side to it, one that, to me, is in much more effect than the previous album. A track like Aut Vincere Aut Mori has very little to do with metal; but instead focuses in on dissonant organ playing that really sets a dark and uncomfortable mood, to say the least. A track like Passage demonstrates more harmony, but a more symphonic edge that definitely might take some by surprise. When you get a black metal track, it's brutal and it's really great, but about half of this album is also in the more experimental symphonic/classical realm that really might turn some people off. That's also not to say that the black metal sections don't include their fare share of classical orchestration, cause they do, Ensorcelled By Khaos being a prime example.
Overall, I really enjoyed this album, it flows very well and has a nice balance of being experimental and being brutal and kvlt. I think that for all the hate that might come upon this album for it's more orchestral sections, it still manages to be more unique than what most bands in the symphonic black metal realm are doing these days. Definitely look out for this if you want some forward thinking symphonic black metal.
Overall Score: 8.5
Highlights: In Obsecration of The Seven Darks, Ensorcelled By Khaos, Consummation of The Seed/Dawn
Posted by maskofgojira at 8:17 AM