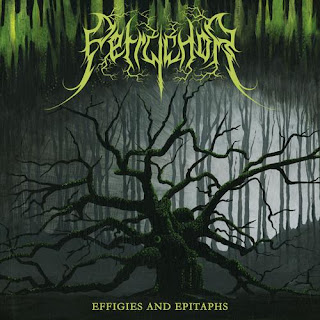 Last year T. released the "Dryad" EP to some well deserved acclaim, this is the album that will accompany that EP in a physical release. I'll be the first to say that, while I enjoyed the EP, I had not kept up with any statements or plans for this album. After hearing quite a mixed reaction, why not go back and see what's causing all the fuss.
Listening back to the EP, there was a definitive atmospheric black metal sound, with the bit of folk influence, but on here, both have been turned up to ten. Listening to this album makes the EP feel so flat in comparison, mix-wise anyway, with the acoustic moments being soft and delicate and the metal sections just blasting you with distortion. The distortion on here makes this quite an interesting listen because a lot is lost in translation, while a track like Seared, Sundered works in the context of being a black metal song, that's pretty much all it's good for, because compared to other songs on here, it's short and pretty straight to the point, there aren't any forays into other styles. In my opinion, it could have been mixed a bit better, to make it heavier sections a bit less harsh and more dynamic. The transitions from one section, or sound, to another is very clumsy, and almost random, which is actually quite disappointing.
I find the folk sections on this album to be the real highlights on here, In Remembrance having a great interlude in particular with some fantastic playing. I know a lot of people who listen to this will most likely agree that the acoustic sections are well done, but I'm sure the majority will still find more comfort in the realm of distortion. Despite my problem with the transitions on the record, I found the post-rock sound on Subjugated and Abused to have not only the best shift from soft to heavy, but in my opinion, is probably this album's best track. It's a shame that the post-rock influence is not as widely used on here, as I feel like it really could have improved this album, for me at the very least.
Overall, this is a decent album, but there just isn't a whole lot grabbing me besides the distortion. I feel like this is just another record that doesn't really stand out with something original yet, like I said, the acoustic and post-rock moments are great, but too little of both are used on here for me. If you're into natural sounding black metal with some breaths of the genres mentioned above, I definitely suggest you check this out.
Overall Score: 6.5
Highlights: Subjugated and Abused, Beneath Highway and Street
Posted by maskofgojira at 11:29 AM