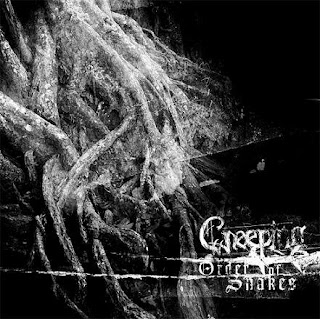 I love me some blackened sludge, and I'm sure long time readers of this blog probably already know that, but I can't help but express it now and again. The shear crusty vibe that sounds so twisted and crushing, at the same time, is what I long for in bands within this genre. Creeping is a relatively new name for me, having only found out about them through Glorior Belli.
I have to say that, despite doing a solid job at coming both the sludge and black metal, this leaves much to be desired in terms of production. For me, like I just mentioned, I love this sort of style because of the crusty nature that it should naturally give off, for some reason that dirty, filthy sound just doesn't come up all that often on here. The production is technically good, everything can be heard well, but that just doesn't do it for me in this style. In my opinion, this album just sounds a bit too polished for my liking, it doesn't really have the right amount of grime and dirt for me to really sink my teeth into it, like some of their peers do.
Now, I'm not going to say that this album is a total failure simply because it doesn't sound like what I would want it to, no, there's still plenty of good stuff on here. A track like The Cavernous Light recalls some Black Sabbath-esque riffery while the title-track, Order of Snakes, and Pestilential Rain display the band's love for all things black metal, in essence, they hit all the right spots and strike the right cues. I would have to say that there are better moments on this album than songs; and I've found moments like the beginning and ending of Crawling Into Hell to be better than half of what's on here, but the rest of the song doesn't really hold up to that opening, and closing. I also found that I enjoyed songs more when the band were going at a mid-to-slow tempo, a more doomy side if you will, which for some reason just really had a good vibe to it, compared to the black metal parts anyway.
Overall, it's an alright release, but like I've said, it just didn't hit me the way I would have liked it to. I feel that these guys write some cool parts, but have a problem with songwriting, as much as production in this case, which is holding them back. If you're already into this band, check them out, but you could find better albums than this one within the same sub-genre if you look.
Overall Score: 5
Highlights: The Cavernous Light, Temple of Graves
Posted by maskofgojira at 11:34 AM