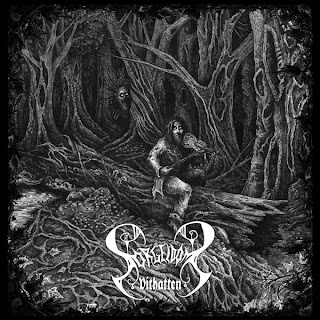 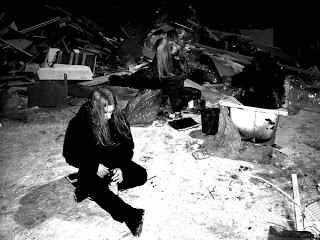 Here we are, just barely over a year later and Sorgeldom is ready to release not one, but two new albums. Last year's "Inner Receivings" made it to my top 50 with it's unique take on black metal that really got me excited to hear where they were going next. Being one of a pair, this album really makes me want to hear what they have in store for us next.
Depending on what you enjoyed from the band's past two releases will definitely impact how you enjoy the two new ones. This album takes a decidedly more lo-fi approach to it's production style, with fuzzy guitars, muddy drums, and hazy atmospheres encompassing the disc. This production style really harks back to the early 90's Norwegian bands like Darkthrone, Ulver, and Mayhem, at least with their classic releases. It's a very raw and noisy sound that might turn those off who liked the cleaner sound of "Inner Recievings." The band have said that this album was recorded during the forest session, so that gives a bit of insight as to why this has that very raw, naturalistic quality to it.
Stylistically, this album takes a bit more of an aggressive edge, at least in it's beginning, with a track like the title-track, Vithatten. On this first half, or so, you'll encounter a more traditional black metal sound fused with a more technical approach towards playing. Along with the black metal sound, the band's roots from acoustic folk music come through as well, quite clearly in fact. Tracks like Vilsna Tankars Spökerier and I Fönstret Blickar Kvinnan really show the band at their most folky, while still making use of electric instrumentation mind you, on the second half of the record. The two sides are both well crafted and interesting listens, but I do think that this record would have fared better if the two mingled with each other a bit more, in my opinion anyway.
Overall, I enjoyed this record, it's not as good as "Inner Recievings" but it's still very solid. The raw production and the instrumental performances definitely bring me back to early 90s black metal, especially Ulver. If you're looking for something along the lines of old-school black metal with elements of folk and progressive tendencies, you can't go wrong with this.
Overall Score: 8
Highlights: Vithatten, Vilsna Tankars Spökerier, I Fönstret Blickar Kvinnan
Posted by maskofgojira at 9:46 AM