Aurora Borealis - Timeline: The Beginning and End of Everything (2011) 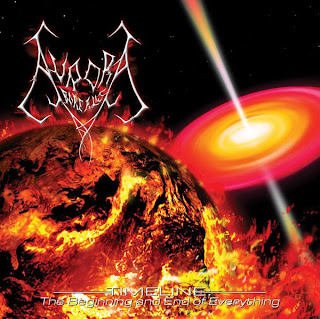 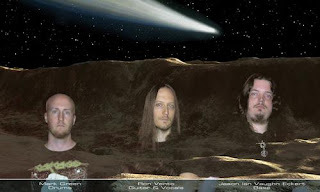 I can still recall a time before I had gotten into black metal, when I was listening to a lot of death metal and I came across a band called Aurora Borealis. I remember scoring the internet trying to find all of their records, liking what I had heard from them. Sadly, they've fallen off my radar till now and I'm hoping to get a similar experience with this new record as I remember getting with their earlier material.
Taking into account the band's more brutal approach towards the genre, a genre with which I have a very hard time getting into now, this strikes me as a more technical record than others I've heard. It's an amalgamation of technical death, melodic black, and old-school thrash on here, a very potent combination that works in their favor, hear tracks like Formation or The Evolution After Evolution. Some tracks have a lot more shifts within them, like the latter track, where things are constantly changing and moving. A track like Beyond The Oort Cloud stuck out to me due to how it was able to blend the extreme metal sound that other tracks had, with an almost progressive metal kind of vibe and structure. It's an intense listen, in the sense that it rarely slows down or stops long enough for you to get a breath in while listening to it.
Probably my biggest problem with this record is the production, and this is purely a personal problem I'm having so those reading probably won't have this problem. In my opinion, the production makes this album feel to processed and mechanical sounding, which in fine in some cases, but it just made me feel a bit awkward while listening to it. In my opinion, this record could have sounded better if it was just a bit, not a lot mind you, more dirty sounding, but once again, just a personal preference.
Overall, this is a solid record, but it didn't really rekindle that feeling that I had when I first listened to them a few years ago. There are some seriously great songs, and riffs, on here though, so it still has that going for it. If you're into extreme metal I don't see any reason you wouldn't want to check this out.
Overall Score: 8
Highlights: Formation, A Creature Called Human (Among Other Things), The Rebirth
Posted by maskofgojira at 11:57 AM