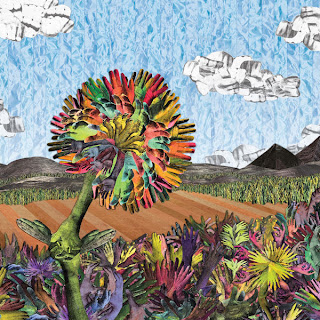 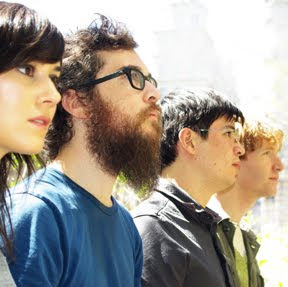 This is an album that I've been interested in covering for a little while, I had heard some cool stuff from the album and I was intrigued. Then, other things came up and I got a bunch of other albums to review, so this kind of fell to the wayside. Well, now I'm taking the time to finally listen to it.
The songs I had heard prior to finally listening to this whole thing really intrigued me with how different they sounded compared to a lot of other noise rock bands I have heard. The sounds that I heard were a lot more playful and electronic sounding, at times very childish, but it really drew me in with how sharp it all sounded, hear tracks like A Thousand Roads. This was really different for me, as the vocals also sounded a lot more tuneful and were done in a very nice crooning style that really was the icing on the cake, in my opinion. A lot of these songs are short and to the point, you won't hear a lot of excessive playing or soloing on here, it's very structured, but catchy.
There's something very odd about this band, which is probably why I enjoyed most of what was done on here. I often imagined a child playing in a room full of toys and machines while I was listening to this, cause it was very melodic and upbeat sounding but it always sounded like it could just go off the deep end into a surge of feedback and noise at any point. Despite all that, it's still very much a pop album, no matter how noisy it eventually gets, and tracks like Skin and Bones or Without A Seed definitely prove that. Now, I have to say that while the beginning of this album is great, tracks like opener Fake Names and the title-track Constant Future are great and catchy, the album kind of wears on you near the end, and songs just are not as memorable as earlier tracks. Not every track at the end is bad, Bright White has a great, heavy bassline, but a lot of songs are just sort of there, nothing special.
Now, this is a good record, I want to make the perfectly clear, I enjoyed listening to this. I have to say again that this album has a great start, unfortunately it kind of wears thin near the end, which is what kind of lowers the score. I'm hopeful that if you like experimental pop or rock music, you'll give this a go, cause it's worth hearing.
Overall Score: 7.5
Highlights: Constant Future, Pure Annihilation, Neverchanger
Posted by maskofgojira at 11:07 AM