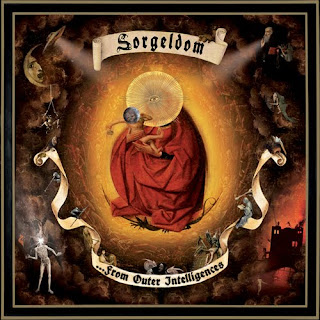 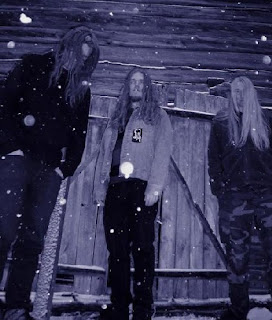 It's time for the second Sorgeldom album being released this year. As opposed to the other "Vithatten," this album was not recorded in a forest, or at least during the forest sessions. From the little bit of info I've gathered from this release, it's more in line with the progressive sound from "Inner Recievings."
If you're not a fan of lo-fi recording, you'll be happy to know that this album has a cleaner, more atmospheric sound than "Vithatten." Like I stated above, this is more in line with what the band was doing on "Inner Recievings," stylistically and production wise. Due to a cleaner production, this album's sound is much less aggressive sounding than it's companion album, but has a much more graspable quality to it. Now, this might just be me, but this album has a certain rainy vibe to it, or at least to me it felt as though the skies were darkened and rain was just pouring down as I listened to this album, especially the title-track, ...From Outer Intelligences.
The sound on here is much more melodic than it's companion, you'll find a much clearer influence from the shoegaze and dream pop realm in here, like in a track like Utesluten Från Universums Koreografi for example. This album also has a much more progressive sound to it, with a lot of interesting riffs and melodies that are constantly moving around. Along with the progressive edge comes the post-black metal style that the band have made use of on their previous two full-lengths, with a lot of clean and acoustic guitar playing with a lot of tranquil and gentle melodies that just float through your mind as your listening to this, hear To Where Your Tracks End. Something that stands out to me on here is the tone of the bass guitar, it's really bouncy and melodic sounding, meaning it's also pretty clear in the mix by the way, but it really adds this sense of playfulness to the album. In all honesty, this record is a lot more of a modern black metal record, as oppose to the more old-school take that is it's companion album.
Overall, I really enjoyed this record and it's definitely up to the standard that "Inner Recievings" set for me. It's definitely a more melancholic record than it's companion, but that works in its favor. If you like progressive-tinged post-black metal, definitely do not let this one slip through your fingers.
Overall Score: 8.5
Highlights: Through Dust Into Lostness, Hänförd Av Tvångshandlingens Synagoga, ...From Outer Intelligences
Posted by maskofgojira at 11:01 AM