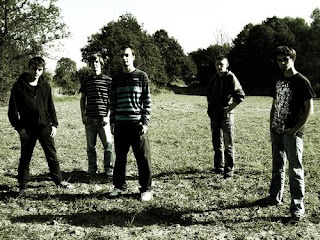 Back when I first heard about the scene, and the word itself, djent, Afekth were one of the first groups I found. I don't know what or why they attracted me, but their debut EP sort of defined the genre for me. Since then I have, obviously, been reviewing quite a few other bands from within that scene, so it's time to talk about these guys.
The three songs on here definitely contain that djent sound, but there's some little quirks on here that definitely reminded me why I started listening to these guys. The first thing that really stuck out to me, both about the band and this EP, was the presence that the bass guitar had, not only was it clearly audible, but it's role was not to just bridge the gap between the low-end guitars and the drums, hear opener Particular Senses. The guitars actually switch it up from time to time, interspersing bits of more technical and melodic moments in between djenty grooves. Probably the thing that did kind of lack on here were the clean vocals, which felt a bit flat and out of place in the band's sound to me.
Overall, this was a decent EP, though it's only a prelude to what the album will be, so I'm hoping for some more good stuff. These guys are still very much doing something other groups aren't doing and hopefully some people begin to take notice of that. Definitely look out for these guys if you're into the djenty stuff.
Overall Score: 6.5
Highlights: My Reality
Posted by maskofgojira at 11:21 AM