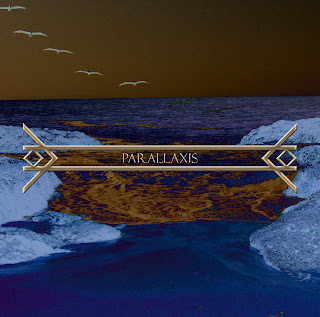 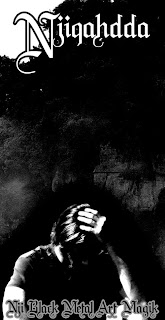 That's right, mere weeks after I've reviewed both the new Njiqahdda and Oaks of Bethel records, and we have another release from the progressive black metal duo. This new EP supposedly takes their sound back a little bit from the technical side that was utilized on their last full-length. Like most of their releases, I eagerly awaited hearing this until I finally got it in the mail.
I guess the first thing that I noticed on here compared to other albums, even their early material, was how loud and clear the drums were; but to be fair the drumming has always been unique and interesting, but on here, in my opinion, it's probably their best production on them. I don't know what people will come into this expecting, and to be fair, a fan of the band should know better by now to expect the band to go into different areas, but this sound is much more melodic than even a release like last year's "Valsuaarpormiis" EP. In all honesty, where I said "The Path of Liberation From Birth and Death" was probably one of the worst places to start your listening experiences with the band, this is probably one of the best. The melodies are a lot more palatable and graspable to an average listener, and are quite memorable as well. There are also notable influences from classical, or symphonic, music on here, most notably on Spiral Flare, the piano lines on both tracks on here are simply fantastic, and easily beat anything bands like Dimmu Borgir and Cradle of Filth have done in the last decade.
This is a very good release, I don't know if you can expect the band to move into a direction like this on their next release, but it's a great place to start your listening experience with them. Now, I'll admit that I've liked some of the duo's previous work better, I'm sure this is common for anyone, but this stands up with some of the best, no doubt. Compared to a lot of other EPs that I've checked out this year, this is easily one of the best, definitely check this out.
Overall Score: 8
Highlights: Parallaxis
Posted by maskofgojira at 10:09 AM