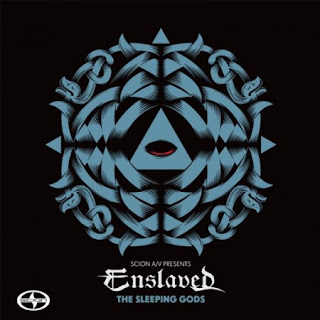 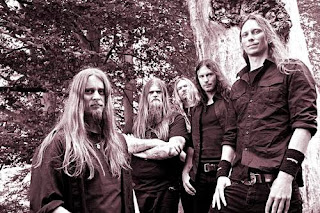 Enslaved have been on quite the up for the past several years, consistently releasing high quality efforts while maintaining an ever expanding sound. Last year, the band released what has been deemed their best album yet, "Axioma Ethica Odini," and this is the follow-up. It seems a bit odd to me that this EP is being released by Scion, but that doesn't really matter as long as the music is good.
Initially I had heard some rumors that this EP was going to contain B-sides from the "Axioma..." album, but that turned out to be false and this is instead five new tracks. If you were hoping to hear something in the vein of that album, you really aren't going to get that, the five songs on here are all very different from one another, and the production on here is a lot more natural and organic sounding in comparison. The disc opens strong with Heimvegen, which definitely brings to mind more of a "Ruun" kind of vibe, to me anyway, which isn't a bad thing at all. With the other four tracks you get everything from the Motorhead sounding Alu Misyrki to ambient/noise on Synthesis, post-rock in Nordlys, and pure viking folk on the title-track, The Sleeping Gods.
Overall, it's probably too experimental a release for some to really get into it, but it's still solid for what it is. Enslaved prove with this release that they are still looking to explore some new territory with their music. If you like Enslaved, or not, you should still check out this record.
Overall Score: 7.5
Highlights: Heimvegen, Nordlys
Posted by maskofgojira at 11:13 AM