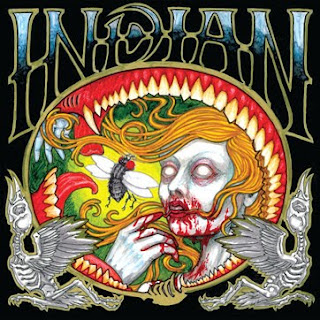 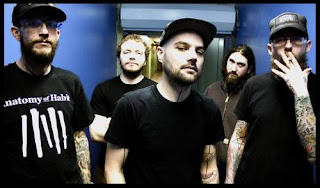 I find it a real shame that I just found out about Indian recently, as I'll say right now that I've become very impressed by their sound. Recently I've been looking into the Chicago metal scene and finding a whole slew of bands that are doing some really cool and original stuff. I'm almost a little upset that I'm just now finding these guys, when I found this album I thought it was literally their debut record, only to find out it's their fourth full-length.
This is one of the first, if not the first, doom album I've ever heard makes a point to sound authentically angry, hear No Grace. It's an album that's extremely brutal and pissed off sounding, compared to a lot of other doom records I've heard thus far, but with melody, with progression, with catchy riffs. The black metal side of the band, to me anyway, really comes through in how this album just assaults you as the listener, making no attempt to put in any sort of accessible point of entry at all and just pounding you into dust. The vocals, in case you were wondering, are just screamed across this wave of distortion, coming off as something that fits only this band most of the time, though there were times where I thought it was Blake Judd of Nachtmystium screaming, the epic Benality for one.
In case you were wondering if this band had anything special that separated them from the other blackened sludge/doom bands out there, they do. Having a member who specializes specifically in noise and making hazy, drugged-out soundscapes in the background of these tracks really adds a weight to this project that just makes them sound so raw and crushing. In a song like the title-track, Guiltless, you can really hear what all this noise does for the band. Even on the acoustic break, Supplicants, the noise still manages to sound at home on. I'll admit that, to an extent, the noise definitely increases the band's crushing nature as well as makes their sound more interesting to listen to, so whether you want to think of them lacking heaviness without it, or just not sounding as bleak, this noise really helps make the album in my opinion.
Overall, this is crushing, heavy, catchy, and black as all hell, but it's still great. I was looking forward to finally listening to this since I got it and it did not disappoint at all, totally amazing stuff. Definitely look for this record, if you haven't already, if you're in the mood for some brutal doom/sludge metal.
Overall Score: 8.5
Highlights: Guiltless, The End of Truth, Benality
Posted by maskofgojira at 6:02 AM