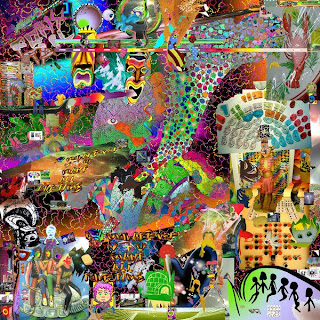 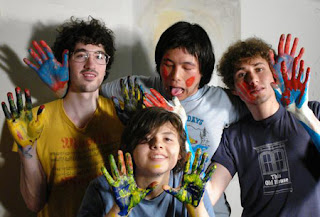 Time for another interesting noise rock band that I've heard good things about. Personally, as you can probably already see from the growing number of reviews that aren't metal this week, I've been listening to a little bit more of this stuff. I've had some friends who are fans of this band tell me they're good, so I figure I'll listen to it and see what all the hype is about.
From the little bit of information my friends had told me about this band before I decided to listen to it, I could immediately tell that this would be little different for me. The vocalist sings without using real words, making use of more sounds and noises rather than any sort of language. The music, which I was under the impression of being loud and distorted, was not, being rather controlled and melodic sounding. I didn't really know that this album was going to have as electronic a sound as it does, like on Beyondersville/Flight of Fance, which is really based more on samples and weird organ sounds. A lot of this stuff I could actually imagine seeing, or hearing to be precise, in a video game.
Despite all the above and any preconceived notions I had had about this band coming into this record were laid to rest by the time the second track, Flabbermouse, started. This album has a much more surf rock kind of tone to it, instead of the noise rock one. In all honesty, the most memorable part of this band is the instrumentation, which ranges from melodic and poppy to sort of spastic and bizarre. It's definitely nowhere near as noisy or aggressive as I had imagined it to be, though I'll admit that some moments where probably just as grating as I had thought, AwayWay.
To be frank, I didn't really enjoy this album all that much, it wasn't bad, it just didn't do all that much for me. Some of the melodies on here were really good and catchy, but to counter it, some of the vocals were just annoying and some of the electronics were grating. I'd recommend this if you're into experimental rock, but otherwise I don't think you're missing out on much.
Overall Score: 5
Highlights: Honey Touches, Tush
Posted by maskofgojira at 11:13 AM