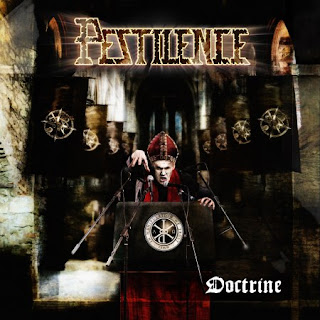 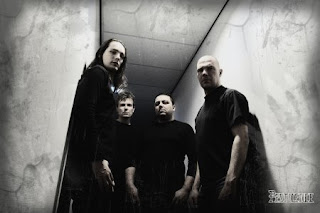 How I long for the days of old, where the European death metal scene was fresh and original, every band was doing their own thing. Nowadays all we have are old bands doing, pretty much, the style they pioneered and little more, newer bands trying to either reclaim the grit and grind sound or more polished takes on the old sound. Pestilence, as well as a few other groups that made comeback records recently, seem to have gone with the latter, which seems less like they want to actually sound heavy as much as they want to sound modernized.
I'll say first of all that Pestilence never was one of my favorite death metal bands from the 90s, I always thought they were decent, but never one of my favorites. I remember listening to their comeback album, 2009's "Resurrection Macabre," and thinking that it was alright, but nothing special. I can't say that the experience I had with that album really made me want to hear that album, but once I heard that bassist Jeroen Paul Thesseling was coming back to the band, I did want to hear what direction they would go into. What I got when listening to this album was not what I imagined I'd hear, and not really want I wished I would hear from this album.
Instead of hearing some sort of technical or brutal death metal, what the band have chosen to do is a sort of weird amalgamation of Meshuggah-esque 8-string worship mixed with the occasional technical riff thrown in, hear the title-track, Doctrine. Now while that, in itself, isn't the worst thing the band could have done musically, Patrick Mameli's vocals just don't fit with the music, they retain this very, what I would call sloppy, quality to them that just don't mesh with what they're playing and they wind up really hurting the album, tracks like Dissolve and Divinity just don't work in my opinion. But, like I said, the music itself isn't bad, the rhythm section is really strong, with Thesseling and drummer Yuma Van Eekelen really standing out on here as the strongest performances, hear tracks like Absolution and Sinister. I also have to say that what guitar solos played on here are done well, as they have a very jazz-fusion kind of vibe to them that really stand out and make the song, in my opinion.
Overall, it's not a bad album, musically, but the vocals just topple over the entire thing in a very sloppy sort of fashion, really ruining it in my opinion. I really think that the band might have had a stronger album if they worked a bit more on the vocals, or tried to include more of a traditional death metal sound into the album. If you're into Meshuggah influenced music, check this out, if you're into death metal, you might like this.
Overall Score: 6
Highlights: Salvation, Sinister, Malignant
Posted by maskofgojira at 4:52 PM