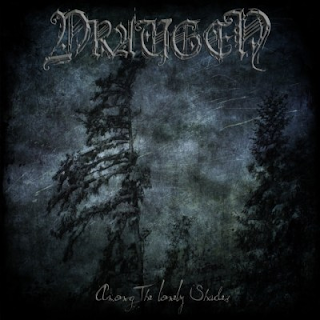 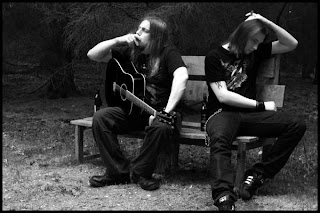 Time for some French black metal, in my opinion, a scene with some of the most productive bands out there right now. Whether it's new bands, like this one, or older, I won't mention any names, you know who they are, there's always been a certain air about them that separated them from the rest of the pack. The French scene has always been one that has almost never let me down, so I'm hoping for the same results with this debut.
If what you're looking for on a black metal is straight ahead riffing, you won't find it on here. If you're looking for atmosphere encompassing everything, you won't find it on here either. To be honest, I'm a little conflicted on what this band is trying to do on here. The duo make a nice attempt at trying to blend atmospheric, melodic, progressive, and post-black metal together into their own blend, but I'm not sure the result was what it probably could, or should, have come out as. Influences come out quite easily, as the Shining sound is definitely one of the more prominent elements you'll hear used on here, Wolves Howl Again. There's also quite a depressive vibe going on in some of the vocals, which is not nearly as annoying as you might think, because it is not the prominent style on here, The Time of Sadness Is Coming.
I feel that this duo have a nice hold on what sound their going for, it's melodic and atmospheric, but a little more experimental, willing to make use of more acoustic led passages and catchy melodies, but the production on here just makes things a little difficult to really grab hold of. I feel like most of the album is just drenched in this sort of fog that makes it a bit hard to really grab ahold of a certain idea and really say, "Oh, I get what they're doing now." Though the album did get both better and more consistent, or cleaner if you will, hear album closer Forgotten Times for a good example, I still found that the ideas shown in the first half were much more original, despite being more obscured.
While I find that this album's best ideas are obscured underneath a rather hazy production, the better songs are cleaner, but not as original sounding. This duo does have potential, but this album just doesn't exhibit enough of it spread throughout each song to really grab me. If you're into black metal that does some exploration of different genres, I would suggest you check this out and make your own assumptions about these guys.
Overall Score: 7
Highlights: The Time of Sadness Is Coming, Alone In The Land of Frost, Forgotten Times
Posted by maskofgojira at 11:03 AM