Planks - The Darkest of Grays 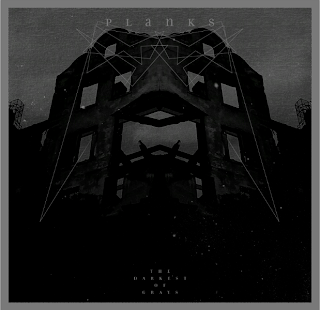 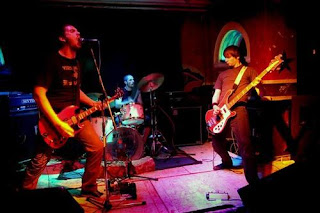 Planks is a blackened sludge metal group from Germany. This is their second full-length and it is, as well as their other material, available for free on their myspace page. This band caught my attention through a description that told me I would like this if I liked Celeste (France).
Surprisingly, this album didn't really channel the same feeling that Celeste's most recent record did with me. This album had less of a hardcore energy and much less dissonant, as the tag above says, it's more sludge than hardcore, not to say that the two don't become interspersed inside. I won't say that I was let down by there being less of a hardcore vibe to the record, but it did give me something different than what I was expecting, which was actually a good thing in this case.
This is a very groove based record, there aren't a whole lot of riffs, but it just throws it's weight around for most of it's duration, hear a track like Tentacles (Solitude Prevails). There's plenty of parts that do bring to mind post-metal more than black metal, but it's an interesting melding of the two into sludge, as a band either chooses one over than other, and while this band does do more with black metal atmospheres in their tracks, the interludes, We Are Translucent, have that post-rock vibe to them that isn't always featured in every track, though it did increase as the record went on. The band is really more comfortable when going at a slower pace, where they often create the best sounding grooves, sorry to keep using that word, and end up making the best parts to headbang to.
I'm not sure whether the band's decision to load the best tracks, it was this way for me at least, in the middle of the record, not to say the early or later tracks are bad, but they just don't have the same "focus" that the songs in the middle have. A song like The Dead Return to War has some of the best melding of sludge, black, and post-metal together this year, and manages to get in a great groove as well. I have to say that for the most part, I enjoyed when the band went into softer territory, cause the atmosphere was always retained from the heavier sections, but it's hard not to get into the title-track, The Darkest of Grays, due to it's incredibly heavy chug.
Overall, this is a really solid record, maybe not the best to come from the genre this year, but still pretty good. I'd like to hear more from this band for sure, hopefully they develop this sound even further. If you like slower stuff, doom, sludge, post-metal with a bit of a darker vibe, check these guys out.
Overall Score: 7
Highlights: Long Live Depravity, The Dead Return to War, The Darkest of Grays
Posted by maskofgojira at 6:48 AM