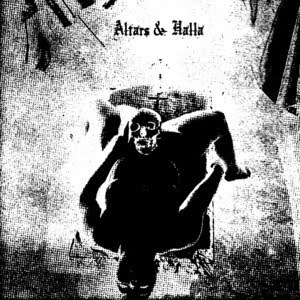 Hella is a raw black metal group from Iran. From what I understand about their past work, it's in a similar vein as this one, utilizing a rawer style of performances. This is my first encounter with the group.
The track that Hella contribute is called 666 Sanctus. This is noisy, aggressive, and atmospheric all at once, constantly assaulting your ears. I found that despite the buzzing guitars and far-off vocals, there were some cool bass-lines going on in this song, where a groove would just come in and you could easily bob your head to it. The song isn't that long, and it moves pretty quickly as well, so it can easily become a bit of a blur if you're not paying attention. 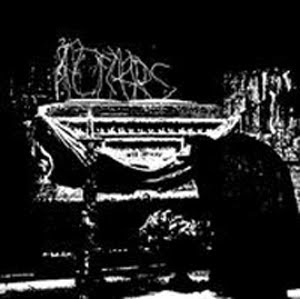 Altars on the other hand is a new Ohio band to me that I've recently found appreciation for. They play a unique brand of black metal that combines very dissonant and noisy soundscapes with more catchy riffs. This is also my first encounter with this group as well.
The song that Altars contributed, Serment De Sang, is definitely the more noisy of the two tracks on here. Harsh feedback and rumbling waves of distortion just roll through the entire track while the band play ferocious black metal riffs. Despite being so harsh and aggressive, some nice melody can actually be found in here, whether that's what you want to hear is all subjective though I guess.
While I'm still new to this genre of black metal, the raw and noisy side, I can safely say that these two groups have not turned me off of the genre. I could definitely see how people might not be able to get into this due to the more under produced sound quality, but there's some gems in here. If you like dissonant and noisy black metal, definitely check out both bands.
Overall Score: 6.5
Highlights: Both Are Highlights
Posted by maskofgojira at 12:51 PM