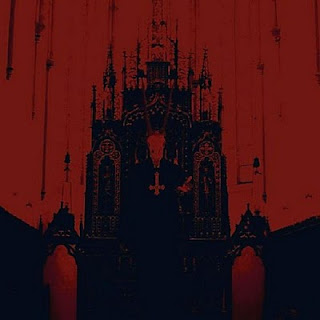 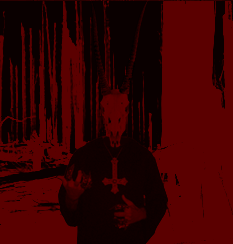 Well It's Certainly Not Jesus.

Idolater is a black metal project from California. Founded by only member, the Idolater, this project was created to make some of the most challenging black metal. Using detailed melodies as well as more dissonant counterpoints is how the sound has been described.
Right away when listening to this, it becomes apparent that this is not just another black metal record, there's something off about it. The atmosphere on here is more frenetic and claustrophobic compared to other groups. The presence of this record actually made me feel more than a little uncomfortable, but I'll give it to him, I've never felt like this before while listening to an album.
The playing on here is dissonant, but like the description said, it's very melodic. Tracks like Lux Et Luxuria or The Passion In My Heart have melodies that are very memorable, but strangely morbid and twisted sounding. It's a very unique sound, it's not dissimilar to the way mathcore groups use dissonance, but it's not as spastic or crazy sounding as that. I've never heard anything that sounds like this to be honest. Though Unholy Matrimony is probably the most normal sounding track on this entire record, it has some of the most atmospheric moments on the album contained within.
Despite all that, Idolater's performance is documented very well. The music, once again like said above, is melodic, but very dissonant and twisted sounding, but his crafting of songs is strong. The use of more tremolo picked based riffs and melodies throughout the record while adding in a very obscure harmonies does stick out among every other black metal album I've heard this year. The guitar playing is obviously strong, and the drums are surprisingly not overwhelming, something that could have damaged this record's sound badly; but it's the atmosphere behind it all that really drew me in. What you'll find behind the guitars and drums, as well as bass and vocals, is a very thick wall of noise or atmosphere that covers this album in a very dense fogginess that only enhances the mystery about it.
Overall, I found this to be a very difficult record, but a good one none the less. This is really original, I haven't really heard anyone else perform black metal this way. If you like more dissonant sounding metal, definitely check this one out.
Overall Score: 8.5
Highlights: Covetous Luxurious, The Amour, Black Sexual Blasphemy
Posted by maskofgojira at 10:58 AM