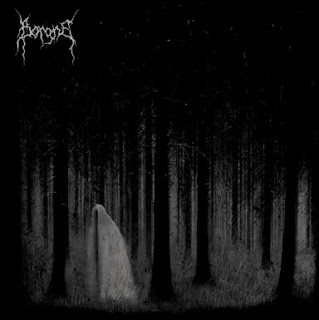 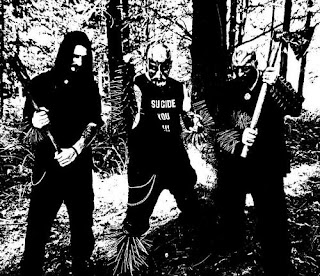 Drifting Through The Woods In A Cape.

Borgne is an atmospheric black metal, now one-man, band from Switzerland. The project used to contain two other members but has since been reduced to a single man producing this entire record. This project takes a similar aesthetic, but a slightly different approach to the genre in which this is placed in on this record.
What originally drew me to this record was the cover artwork, which, as ordinary as it may seem compared to other black metal covers, just grabbed my attention. When the album starts with a fairly unoriginal intro track, the album appears to be set for the trash bin, but the real opening track, Tainted Utopia, opens up with a more epic black metal sound. This sound is one that really grabbed me, as it wasn't just another atmospheric band, the riffing sounded just as big any symphonic metal record, think Dimmu, but more guitar oriented.
Most songs on here carry with them the standard for longer song lengths, but this record seems to be a lot more guitar heavy, and aggressive overall. Sure there's still a big atmospheric presence on this record, but the symphonic and ambient textures work to almost enhance the guitar sound by making it sound epic. I can say that the mood of the record, thanks to the more aggressive tendencies on here, feels a lot more oppressive and commanding. There's a lot less of a focus on the noises and atmospheres that cover up the guitars, instead either blending them together or focusing more obviously on creating atmospheres for the background of the track.
While I would say that the ambient side of this project is most definitely more centered in the symphonic realm rather than ambient or noise, as stated above, it's used to only create an epic guitar sound for most of the album. The synthe work on here I actually found to be rather well performed, as the synthes do not overpower the other instruments but are still able to be heard clearly. In tracks like Dark Mirror, the outros are used for keyboards almost exclusively.
Overall, I thought that this was a pretty impressive record, while not great or genre-bending, I did enjoy it. This is certainly a different take on the atmospheric end of black metal, and one I'd like to see more bands try and do. If you like more melodic and guitar oriented black metal, with a foot in the atmospheric/ambient end of the genre, definitely check this out.
Overall Score: 7.5
Highlights: Die Trying to Take Off The Rope, Suffering to Buy Our Poison, The Plague
Posted by maskofgojira at 12:08 PM