Chronocide - The Solitude of Man 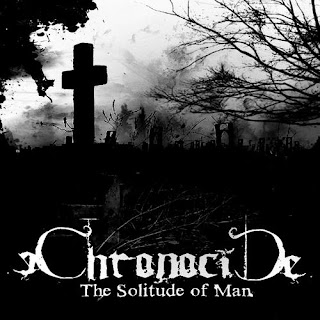 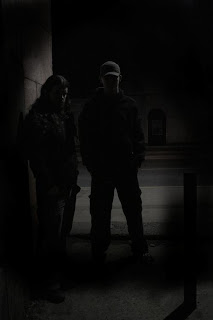 Chronocide is a black metal/grindcore duo from the UK. This is their debut full-length record, following a small EP that was released earlier this year. This album caught my attention for being released on FETO Records, the label started by Anaal Nathrakh guitarist Mick Kenney, who also mastered this record, and Shane Embury of Napalm Death.
This album opens up with a rather slow going intro track, which in all honestly could have been shortened by about a minute, before bursting open into the opening riff of Children of Thalidomide. This track essentially gives you a short introduction as to what's in store for the rest of the album, black metal riffs played over Gatling-gun meets punk drumming that just blasts your face off. Despite it's more black metal riffing style, the grindcore elements in the mix make this record sound extremely violent and chaotic in comparison to a lot of other groups, Mick Kenney's work probably contributed a bit to that as well.
Despite all that's going on in the more grind oriented tracks, everything can still be made out quite clearly, hear tracks like Litany or Society of The Spectacle. During tracks like that, it's common for bands to kind of loose the song in all the fast-paced nature of the music, so it's nice to hear a group that can pull of the violence while making it sound nice and clear. I also found hints of death metal to come in during some tracks as well, recalling the genre's more technical side while still retaining a certain amount of feeling to it, not sounding like it's being done to show how technical they can play, but instead showing that they can write a decent riff.
When the duo take a more black metal approach, they do it very masterfully, hear Veil for example, where fast-paced riffing and pounding drums dominate most of the track but there's still a moment of calming down for more atmosphere to be introduced. That brings me to my next point, as the record starts of very aggressive and crushing, towards the middle of the record, more and more atmospheric things start being introduced into the mix. Even when the music slows down to a more mid-paced crawl, it still manages to build an atmosphere that truly drives the black metal part of their sound even closer to home, for me anyway.
Overall, I have to say that when I want blackened grind, this is the type of stuff I love. This is aggressive, melodic, violent, atmospheric, and brutal all at once without sounding contrived. If you like music that just blasts you without mercy but can still write a decent riff, definitely check it out.
Overall Score: 8.5
Highlights: Litany, Cowardice and Greed, None Shall Sleep
Posted by maskofgojira at 6:04 AM