11 As In Adversaries - The Full Intrepid Experience of Light 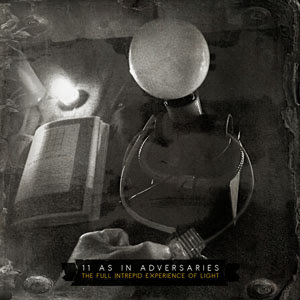 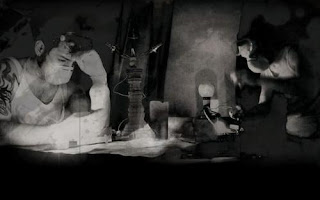 I See A Dark Light.

11 As In Adversaries is the new band formed by the two members of French black metal group Glorior Belli. This was originally supposed to be the fourth Glorior Belli album, but was later decided to be released under a new band. Now considered a debut for this group, this is one of the most left-field black metal records this year.
For anyone that wants to be clear on the differences between this band and Glorior Belli, I think the differences pop up immediately as this record opens up. While Glorior Belli is decidedly black metal with some more progressive influences, I'd say this album is held more the other way around, containing a larger focus on experimental styles rather than brutality. Melody also has a much greater role on here, making use of more abstract sounding guitar lines and clean vocals dominate this record. I'll make it clear that if you don't like progressive music, chances are high that you won't like this.
If you come into this album with an open mind, chances are that you'll get a lot more out of this than if you come in looking for something in particular. I think if you want black metal, this record will be too angular sounding, but on the other hand, if you're looking for something proggy, this might not be technical enough or have enough solos in it for you. Tracks like Reckless Beacons Attraction might be enough to demonstrate a more proggy edge to the black metal crowd due to it's shorter length, but for prog fans, the epic title-track, The Full Intrepid Experience of Light, is probably where they should begin due to it's longer length and constantly evolving nature. Though a sent of familiarity does weave itself in and out of this record, definitely hinting towards a kind of Celtic Frost type of punk vibe.
The clean vocals that are on most of this record are done in a very cool way, though I've read that they could get annoying, but that's subjective. J's vocals are done in an almost melodic punk way that has him kind of phrasing words rather than singing them and creating different sounding harmonies over for himself. Niklas Kvarforth of Shining also appears on this record, The Night Scalp Challenge, providing a very odd performance that includes some of the most aggressive vocals on this album.
Overall, I have to say that I really enjoyed this record, and continue to with every listen. There's something unique about this album, I wouldn't call it catchy as much as haunting, certain things just seem to stay with you. If you like abstract sounding black metal, or metal in general, definitely check this out.
Overall Score: 8.5
Highlights: The Full Intrepid Experience of Light, The Night Scalp Challenge, Verses From Which to Whirl
Posted by maskofgojira at 8:58 AM