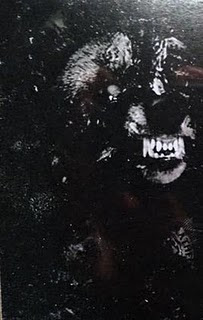 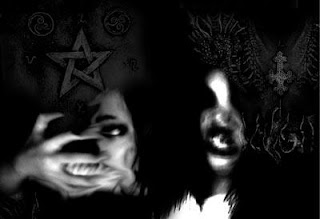 Wolven Howl is a raw black metal duo from South Korea. I'm not really sure how old this demo is, as I was under the impression that it was released this year, only to later find out that it was originally released back in 2004. A rumor has been spread around the Internet that this duo features one member that's blind and another that's deaf.
Not being familiar with a whole lot of groups from the rawer side of black metal, modern anyway, I can't really compare this to a whole lot when I say that this band totally fits that label. The two members have apparently divided up their playing pretty equally on here, with one member handling the vocals and guitars and the other the drums, bass, and grunts. I have to say that within these three songs, the vocals of both members are quite different from each other, with one making use of a lower, guttural growl while the other, and more prominent vocalist, makes use of more traditional black metal screams.
As just said above, this thing totally fits into the raw aesthetic of the sub-genre it's put into, as the sound on here is very noisy. The guitars are very buzzy, and at times a bit too far back in the mix, but it's still clear what they're playing. The drums on the other hand are way too far back in the mix, most of the time I could either only hear the cymbals with the snare, opener The Mortal Warrior's Dom, or the cymbals and the kick-drum, Wolves From The Blackdeath Realm, with the cymbals sounding like someone hitting a plate repeatedly over and over for the most part. The bass is almost nonexistent on most of this, leaving almost no trace that it was actually played for the most part. I'm not sure if this next statement is true or not, but due to the different sounds on here, mainly the drum production, I wouldn't be surprised if this demo is actually three songs from three separate recordings put into a single tape.
Overall, musically it's not really all that bad sounding, they're not the best performances out there, but it's short and decent. I would say that a better production would do these guys some good, and it doesn't even have to be the best production, just something a bit less noisy. If you like raw, aggressive black metal, definitely check this out.
Overall Score: 6
Highlights: Howling From Hell, Before The Bronze Gates
Posted by maskofgojira at 12:55 PM