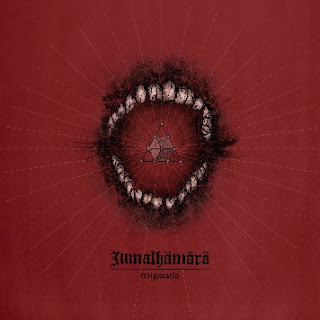 Jumalhämärä is a progressive/experimental black metal group from Finland. This is their first "official" full-length album, their first full-length was a live record, followed up by two EPs. I've had this record for a while, just getting to it now, don't have a reason, just because.
This album really genre hops, crossing into post-rock and noise rock territory while keeping a very black metal sounding core. There's a sense of jamming these songs out and just letting them go wherever they feel like going, if you want to blast-beat over a rather open sounding riff, it's in there, Ecstasy In Blood - A Ballad, if you want a slower section that's more reminiscent of doom, it's there, Resignaatio. I wouldn't go as far to say that this album is progressive or avant-garde sounding, as much as it's a bit adventurous, as a lot of the things heard on here have been heard on other records by other bands already.
This band makes each track feel like it's own song while also making it feel like part of a whole concept, something I haven't heard a lot of groups be able to do, this year anyway. The album starts with a more typical sort of blasting black metal tracks, but as the album progresses, more moody sections and songs begin to be introduced. By the end, every element that's been introduced along the way is just thrown into the outro, Of Enlightenment and Righteousness II.
This album is raw as well, it's not really produced extremely well, but it sounds like what I'd imagine these guys playing live would sound like. Each instrument has it's place within the mix of this record however, each player can be heard clearly, the distorted bass comes out every once in a while and even takes center stage, just in case you were wondering about it, hear the end of Storm Is Coming. There are moments where feedback comes in and, make note that it doesn't interrupt the song's flow, but feels like it belongs there. These songs appear to fold into each other, into a rather flowing album that feels complete and not like a collection of songs.
Overall, for how long I had kind of been anticipating listening to this record, I was actually a bit disappointed. This album is bad by any stretch of the word, it just didn't live up to what I had kind of thought it would be in my head. If you like experimental black metal, definitely give this album a shot.
Overall Score: 7
Highlights: Storm Is Coming, 596
Posted by maskofgojira at 5:16 AM