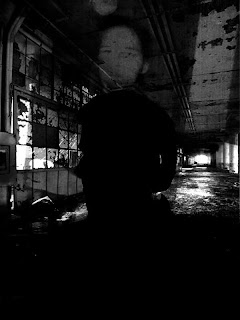 The Factory Has Closed.

Haeiresis is a black metal project from Lithuania. This is the debut album from this project which contains Brooke Johnson (Hesper Payne, The Axis of Perdition) guesting on bass and mainman S.B. of Inquisitor. This album restrains itself compared to S.B.'s main band, but is still not quite traditional sounding.
The riffing on here definitely shows that conventional black metal is not where S.B.'s head was at when he was composing for this record, or at least it doesn't turn out that way. This album appears to borrow more from his proggy side, demonstrated more fully in his main band, as well as a bit of an industrial/dark ambient vibe as well. Throughout the record more abstract riffs are used, as well as melodies, that make it hard for this to be looked at as a trve, kvlt black metal record. There are also too many solos on here to for this album to be put into that box.
The vocals on here are also a far cry from any sort of black metal screams or howls. The vocals, from what I could gather, have been pitch shifted down as well as distorted to make it sound like something out of a weird horror movie. While they didn't bother me, I have to say that they don't always work well with some of the music.
Songwriting on here is strong however, with the more progressive riffing, hear Traces of Decay, and odd vocals, this album does have it's own personality. Most tracks on here are done in a more aggressive and technical fashion, as a result, they're often done in a faster context; but when the music does slow down, hear Emptyroom, it actually allows the music to gain a bit more atmosphere, and ultimately enhances the track itself. There's a really cool dark ambient/industrial atmosphere that lingers around these songs that really adds a unique personality to the overall vibe this thing creates. Really the only thing I can complain about on here is the use of more dark ambient pieces taking up about half of this album, while some, Transmigrating Corridors II, work well even though their long, some others, The Coming Wake, are just dull and uninteresting. Honestly, the only band that I could compare to this one is the masters of the atmospheric black metal sound, The Axis of Perdition.
Overall, this turned out to be a very interesting record that was pretty unique. I could see this being a pretty polarizing record, but i'd say that I lean more towards enjoying it. If you like industrial/ambient black metal, that's also a bit progressive, then definitely check out this album.
Overall Score: 8
Highlights: Hallowed But Hollow, Surreale, Emptyroom
Posted by maskofgojira at 7:20 AM