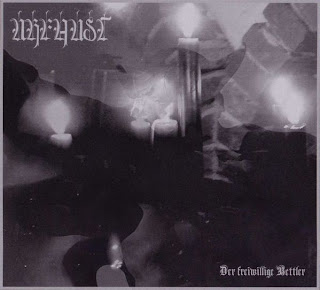 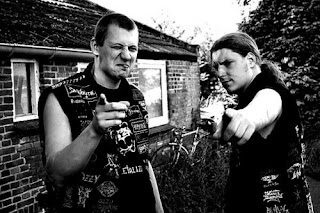 Urfaust is an atmospheric black metal duo from the Netherlands. The duo has made a name for themselves through their unique take on the genre by making use of odd operatic clean vocals, uniquely classical atmospheres, and more adventurous playing. This is the follow-up to their 2005 album "Verräterischer, Nichtswürdiger Geist."
I'm only vaguely familiar with Urfaust's work, even though I've heard nothing but praises sung for their unique style and how great their records are, this is the first record I've actually listened to from start to finish. Being only peripherally familiar with the band, excuse any of the following comments, coming from a novice who is probably going to make long-time fans scoff at the references I make in here. This whole review will probably end up only stating the obvious and already known for those fans, but if you're a new fan, hopefully you'll end up looking into this band, and already you know my impressions.
As stated above, I was not immune to this duo's charm, not to say that I ever was, but this was a band that I just never got around to checking out their stuff beyond what I'd hear on the occasional compilation or split. Though I never really gave in until now, I always had a certain amount of respect for the duo for doing something that was so well crafted and unique and that from what I read made them so polarizing as a group. Previous recordings were said to be some of the most uniquely minimalistic black metal records for utilizing only drums, guitar, and vocals; this album shows a shift in that with notable bass lines running throughout the entire disc, as well as dark synthes lurking beneath the buzzing guitars, as well as more experimentation with the vocals as well.
From this album, I was very impressed with the dark atmospheres that just permeated the sound, and was ultimately what impressed me the most about this record. The psychedelic vibes that came from the slow moving of Der Mensch, Die Kleine Narrenwelt or the more aggressive and black metal tendencies of Ein Leeres Zauberspiel, both of which I found entrancing and at some points almost suffocating in their own ambiances.
Overall, a very good record and one that definitely made me a fan of this band and I can see why this band gets all the praise it does, they surely deserve every word. I think long time fans will no doubt be pleased with this release, and once again, I am a novice when it comes to this group. If you like atmospheric black metal that is very original sounding, definitely check this duo out.
Overall Score: 8.5
Highlights: Vom Gesicht Und Rätsel, Der Mensch, Die Kleine Narrenwelt, Der Zauberer
Posted by maskofgojira at 10:05 AM