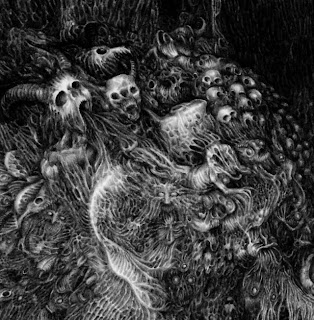 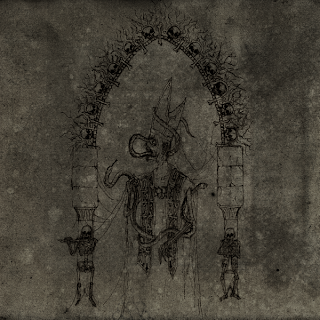 A Tower of Souls.

Flagellant is a Swedish black metal trio that just released it's debut record. This album caught my attention through the cover and seeing the tag of just "black metal." This came at a point where I was looking for something very basic, black metal with not a lot of deviation.
This is not a clean, unique, or progressive black metal record, this is the stuff that fans of the early 90s bands will probably find enjoyable. With aggressive, tremolo picking dominating these songs as well as a very heavy use of atmosphere, this is traditional black metal alright. Visions of bleak settings with dark skies are painted through this band's use of a more straightforward black metal attack, no deviations on here, it's a record I'm sure Watain would approve of.
The production on here really suits the music well, it gives this album a huge atmosphere that just makes this thing feel monolithic. Even when the band is blasting, hear God of Torment, the atmosphere can even feel like it's engulfing the band at it's most aggressive. I did enjoy how the guitars have an almost crusty feel to them on here, where it sounds like real people are playing this, for obvious reasons I'm bringing this up. A track like The Unseeing Eye really has that sort of punk attitude/vibe that really gets me fired up when I'm listening to black metal, and the crusty tone really enhances that.
There are moments on here where the band do flirt with a more melody than other tracks, hear the almost blackgaze sounding intro of Within The Circle of Ouroboros. However, the melodies used are never overwhelming a song so much that something outlandish, like clean vocals or obvious parts that are meant to be catchy are used, like a chorus in a pop song for example. Other songs on this album don't get nearly as catchy or melodic as that one does, but do make use of a bit of melody here and there.
Overall, this is a very strong black metal record, I don't think it can compete with some of the others that have been released this year, thanks to these guys being a newer group, but this is very solid. A great atmosphere that isn't too overpowering while still giving out punishing black metal. If you like the genre done the old-school, traditional way, than this is an album you're gonna want to check out.
Overall Score: 7
Highlights: God of Torment, Monuments
Posted by maskofgojira at 4:12 AM