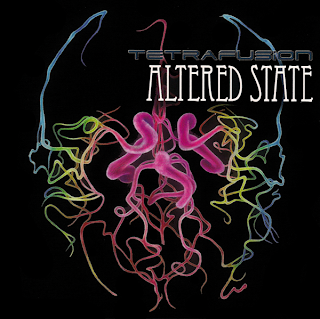 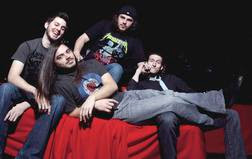 Tetrafusion is a progressive metal/rock band from Louisiana. This is the quintet's second album and my first encounter with the band. The deal here is, I've had this album for a few months and have just kind of done other stuff, I figure it's time to review this.
As stated above, this is the group's second overall record, but their first to make use of vocals, not that you could tell based on the opening minutes of intro track Collage of The Present. This record could really catchy you off guard when you listen to it, as it will either be something you like and enjoy or you'll absolutely hate. Besides that fact, I think that many fans of progressive music may actually find this album to be quite interesting, especially musically.
Musically, or instrumentally I should say, this album is kind of a mix between the more traditional prog-metal stuff like Dream Theater and the more fusion sound of newer groups like Scale The Summit. You essentially get all the technical prowess and immense instrumental passages of both the bands. But that's just how the band actually sound, as there are several other musical styles coming in and out of here as well. Besides the already mentioned prog-metal and fusion stuff there's all a bit of old-school sounding prog-rock riffs and synthe work going on in here, a bit of a post-hardcore/metalcore kind of thing every once in a while, and a touch of a few more genres like mathcore, Last Chance, or alternative prog, The Deserter. The bass is also quite prominent on here as well, with several bass solos being scattered around the album, hear a track like Shadows.
The vocals are mainly the part of the band that will be the deciding factor for this album, if not the band. Garry Tubs is not a terrible vocalist in any way, but his style sounds like a mix between a more modern post-hardcore singer and one that would sing for a prog-metal group, like Pagan's Mind or Mind's Eye, leaning a bit more towards the former, in my opinion. Besides the obvious take-or-leave style of voice he has, from the lyrics that I heard on some of these songs are just really bad and cheesy sounding, despite coming up with some very cool melodies, that's not going to repent for some of these lines.
Overall, I found this to be a solid album with some great playing all around. As I said above, this might not be for you, but it should definitely appeal to those that like more modern prog bands at least. If you like progressive music, definitely give this band a chance, you might really dig it.
Overall Score: 7
Highlights: Monologue, The Deserter, Tears of The Past
Posted by maskofgojira at 12:18 PM