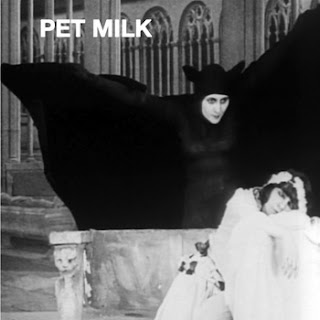 The Hazy Dream Of Pop.

Pet Milk is a dream/noise pop group from Philadelphia. This is their first release and features some sounds reminiscent of groups like My Bloody Valentine, to whom they cover on here as well. I found this demo through a list of new releases on Peasant Magik.
I'll be honest and say that I'm not the most familiar with groups that originally came out of the shoegaze and dream pop scenes back in the late 80s and early 90s. From other reviews and comments on this group, it seems as though they're pretty true to the original sound, making use of fuzzy guitars, simple beats, and danceable melodies. There's a nice contrast on this record where the female and male vocals often are sung on top of each other, creating a very pleasant sounding dynamic on these songs. Aside from the shoegaze/dream-pop influence, I'm hearing a bit of a Beach Boys vibe on a few of these tracks as well.
These songs are short and sweet, they won't take you on any detours, tracks like Permanent Vacation are just over three minutes and give you that 90's pop that is danceable and catchy enough to stick in your head without getting annoying. The My Bloody Valentine cover of Paint A Rainbow is well done, probably the fastest track on here, being comprised entirely of female vocals that just suits it so well. While some of the other tracks on here are good, I didn't find them as entertaining as the ones listed above.
Overall, this was quite an entertaining record, and coming from someone that isn't the biggest fan of shoegaze, I did enjoy this. While I think some of these songs could be put together a bit better, some of these songs are just plain catchy and melodic. If you like raw sounding, simplistic dream pop, definitely check these guys out.
Overall Score: 6.5
Highlights: Permanent Vacation, So Bored
Posted by maskofgojira at 12:37 PM