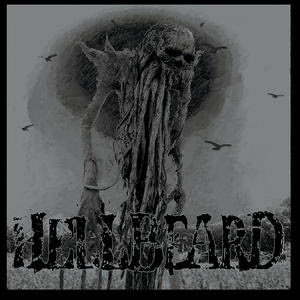 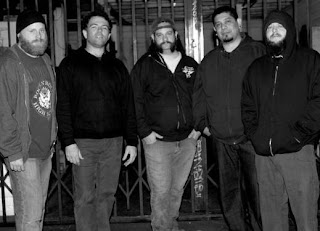 Neurosis And Mastodon Jam Out.

Hellbeard is a sludge/post-metal group from California. The band's profile has steadily been rising thanks to their blend of the two genres in a more "original" way. This is also their debut record and showcases a rather well-rounded sound already.
For a band's debut, like said above, this is well-rounded and diverse while keeping a core sound. Essentially, this album mixes post-metal, sludge, crust punk, thrash, and hardcore and just blends them all together in a big pot. Album opener Locomotive, moves from slow and brooding into crusty thrash-esque territory within about a minute of it's start. There enough genre crossing throughout the entire album to satisfy any listener, or at least me.
While it's fairly obvious that the slower tempos of post-metal and sludge are where this band have made their home, the other genres make enough appearances to keep it from getting dull. There are plenty of moments when the band get soft and more atmospheric, Inblackened, as well as parts where they get fast and more aggressive sounding, Southern Love. Out of everything the band demonstrates on here though, I found that when they lock into a groove, hear the title-track, Scarecrow, it really just got me moving. It's also quite nice during Devil's Nest, when the band completely break down into a very moody and almost pretty sounding clean guitar bit.
I'd have to say that about half of this album is instrumental, some of the longer tracks barely make use of vocals at all. I found that it's during a lot of instrumental parts captured my attention a lot better than when the vocals were being used. The vocals aren't even bad, if that's what you're thinking, they fit quite well, but that's just for me, maybe someone else will like the vocal sections better. The vocals on here actually make use of a more hardcore grunt that just sounds wretched on some tracks.
Overall, this was a decent album, not quite as good as what I had heard, but still pretty good. These guys definitely have a cool sound, they just need to write some better songs. If you like slower forms of metal, sludge, doom, post-metal, definitely look into this one.
Overall Score: 7
Highlights: Scarecrow, Devil's Nest, Ember
Posted by maskofgojira at 8:06 AM