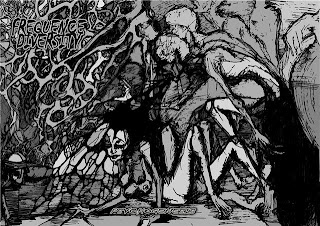 Frequence Diversity is a technical deathcore/hardcore act from Belarus. This is their debut album and it shows. This will definitely appeal to fans of the djent/tech metal stuff as it holds a lot of Meshuggah influence on throughout.
As this is a short record, I'm not going to dwell on it and write a whole lot on it, as it isn't really something that really appeals to me. Based on the cover-art, the logo, and what it was tagged when I checked this out, I was expecting something different, so this is pretty much my impression of what I got listening to this album. After starting the album with the quintessential ambient piece, Pathological Disharmony opens up with what sounds like a mix between Meshuggah-influenced grooves combined with short bursts of technicality. If you're wondering what I expected, it wasn't this, no offence to those that like this style; I expected something more along the lines of a Dillinger Escape Plan or Converge style.
If you haven't guessed already, this album wasn't really my thing, like at all. There are several things that just turned me off from this album. First off, the production, which I found to be far too raw sounding for this style of music, it doesn't have enough of a mathcore sound to pull off being this raw, in my eyes anyway. Secondly, I'm just not a fan of the vocal style, which goes for a more hardcore yell, think Despised Icon, which was a band I never got into. Finally, instrumentally, the band just isn't doing anything that really grabbed me enough to go, "Wow, this is cool." I found most of this album to be quite boring and rather dull. Tracks like It's Feeling This Raw Pit just exhibit everything that I hate about deathcore and hardcore music, but the following track Captain Beast (Because You Don't Know...) demonstrates a more old-school metalcore vibe that kind of reminded me of Bleeding Through.
Overall, this was an album that just didn't grab me at all, wasn't my cup of tea. Luckily, this album is just over twenty minutes long in total, which meant that all nine songs were almost always under three minutes. If you like more technical hardcore, check this out, but I think you'd still be able to find better groups than this.
Overall Score: 3
Highlights: He Would Curse Them All, Captain Beast (Because You Don't Know...), M-11
Posted by maskofgojira at 9:26 AM