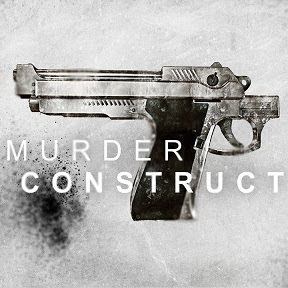 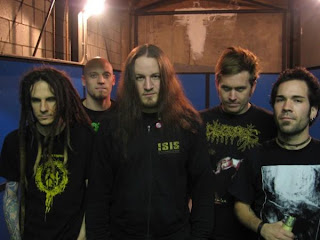 Get Ready To Grind.

Murder Construct is a death metal/grindcore supergroup from California. Featuring members of Intronaut, Cattle Decapitation, and Exhumed, you can guess that this is going to be brutal and appeal to those who like more of the real stuff, not the scene stuff. This is their debut recording and is being released by Relapse Records.
If you're not ready to have your face sandblasted, it's probably best to listen to some of the member's main bands before diving into this. Opener Control wastes no time opening with swift guitars and blasting drums, in a flash. This is discordant and brutal, as well as relentless, so much so that it can actually be a bit hard to remember what just happened in a given song. I also have to give it to Travis Ryan (Cattle Decapitation), whose vocals on here are just brutal, making use of his lower register for most of the record which only enhances the overall brutality of this record.
It's obvious that each of the member's past work has definitely led them to be masters at their craft, this thing just grinds. There is rarely a point on here where the band slows down, proved by all but one track being under three minutes, End of An Error, which ends up going into an Intronaut sort of vibe anyway. Saying that, there are moments on here where the band trade speed and aggression for groove and a bit more melody, hear I Am That, which features a great breakdown before going into a solo.
Overall, I have to say that this was a pretty decent grindcore album, not really my favorite, but still worth checking out. I found some of the shorter tracks to lack any real memorable factor, even though that's prone to happen in grindcore anyway, but the band made up for it with the longer tracks. If you like grindcore, death metal, goregrind, ect. definitely check this out.
Overall Score: 7
Highlights: No Savior, I Am That, Submission
Posted by maskofgojira at 10:16 AM