Demoniacal Genuflection - The Ministers of Lamentation 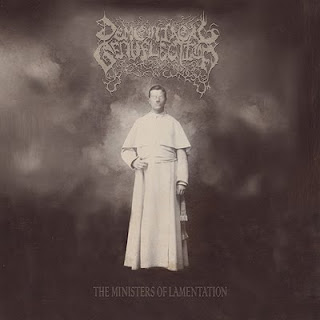 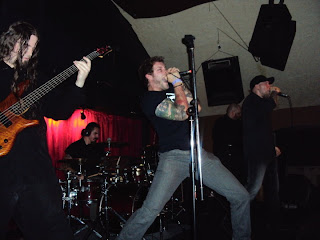 Demoniacal Genuflection is a brutal death/black metal group from Texas. This is the group's first full-length debut, following up a series of demos and samples. Probably the biggest thing about this band, right now, is that it features Dobber of Insect Warfare on drums.
This is the first time I've honestly heard of black metal being melded together with brutal death metal, and even then, this album still brings a pretty unique blend of progressive sounds as well. Within the first track, Catechist, the intro goes from a more symphonic black metal vibe into acoustic guitars before any real actual metal parts come out, which then has an almost doom/death sound. From this opening track onward, I was impressed at how this album proved to not stick to what I assumed it would be; but that's not to say there aren't moments that are what I expected, hear Theophanic Din of Suicidal Whispers.
The mixture of elements from progressive, symphonic, doom, melodic death, grindcore, brutal death metal, black metal, and more made this an extremely unique sounding album. Very few groups manage to combine elements from all these different styles, let alone do it well, and while I'm not saying this album is completely unique and original sounding, or even that all the songs work, I did think that most of these songs were well crafted and performed. While the title-track, The Ministers of Lamentation, I felt joined more symphonic elements with more groove oriented death metal excellently and is a fine example of such a great melding of styles on the record, but I felt the shortest track on the album, None of Your Children, to be a bit sub-par, focusing on a more grindcore/brutal death sound.
Most of the instrumentation did consist of a more brutal approach however, that needs to be made clear. A lot of the drumming is very fast and aggressive with a lot of blasting and double-bass work throughout most tracks. The vocals on here also focus on more brutal and guttural growling mixed with higher pitched screaming. Besides that, I found that the guitars varied a lot more, perhaps showing the widest range on the entire record.
Overall, I have to say that I did enjoy this record quite a bit. It certainly isn't a great record, but these guys certainly have a lot they want to do, or attempt, and they succeed for the most part. If you like brutal metal with a bit of experimentation, definitely check this one out.
Overall Score: 7.5
Highlights: Ordained Repugnance, The Ministers of Lamentation, Baphomet's Throne
Posted by maskofgojira at 12:35 PM