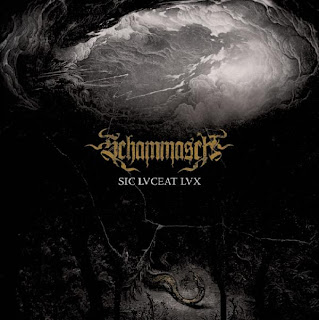 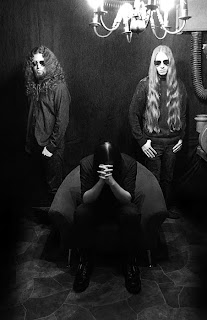 Black Metal With A Touch Of The Extreme.

Schammasch is a black/death metal group from Switzerland. This is the group's debut album and their first recording, to my knowledge. Featuring two members of underground black metalers Totenwinter and one from avant-garde black metal group Blutmond, you can be sure that this is going to be a little bit different.
While the opening track certainly shows that there's a bit more of a different take on this sound rather than a more simplistic take on black/death, the second track, He Whose Face Is Made of Entrails, is where you get the first glimpse of the more experimental sounding riffs that make up some of these tracks. The riffs aren't so simple as what many other groups are doing, and since the guitarist is the member that comes from Blutmond, you definitely get his influence on here, as the riffs are much more angular sounding and less brutal, but they are certainly more straightforward than his main band. There are also several other elements included on this album that I've haven't usually heard within this genre, such as acoustic guitars, No Light From The Fires, or the more melodic sludge-meets-blackened thrash on INRI.
There's a hint of a more epic sounding atmosphere on this record that wasn't present on the Blutmond album that came out earlier this year, which surprised me a little bit, hear Chaos Reigns. While this entire record wasn't made up of that atmosphere, if it was it might get boring or repetitive, but came out at certain points within certain songs that just really grabbed me and made me want to listen to that part again. This atmosphere usually ends up coming out closer to the end of a song, which does give it a bit of a cinematic kind of vibe, in my mind anyway.
But this entire record is not all good, I found some of the slower moments on tracks like Lvx Aeterna or Black But Shining to kind of drag on a bit too long for me. I found most of these parts to kind of go nowhere, there are some tracks, The Venom of Gods, where slower moments are actually utilized really well within the confines of the song, but more often than not, I just became bored with some of them. I don't know if you could call these slower moments sludge or doom, but they just didn't really fit with the more mid-paced nature of this album in my head. I could see other people getting into these sections more than I would, but once again, they just weren't for me.
Overall, I did enjoy this record quite a bit, though I do have my personal preferences as to which I like better than others, obviously everyone will. There are some moments on here that I wish Blutmond might have used, but that's not something I can change so I'll just have to make peace with it. If you like experimental black metal, give this a whirl.
Overall Score: 7.5
Highlights: Chaos Reigns, Black But Shining, The Venom of Gods
Posted by maskofgojira at 8:52 AM