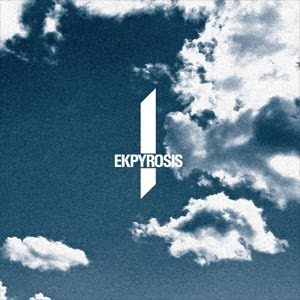 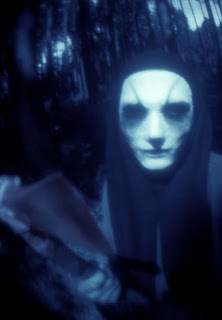 And It Came With No Name.

Ekpyrosis is an avant-garde metal/blackgaze project from Germany. This is the follow-up to the project's underground "hit" "Mensch Aus Gold," which came out back in 2008. This new album could be seen by some as more accessible, simply due to the fact that this album has more than one song on it.
This album has nine songs in total, though none of them are actually titled, it does make this a bit easier to digest than the last album's single, thirty-minute long track. Along with that, this album also features a less fuzzy production sound, it's cleaner, though not pristine. Vocals are also a lot more prominent on this release as well, which could add to the more "accessible" feature, but when you compare this to even other black metal releases, I doubt a lot of people are going to even know this group.
Soundwise on here, it's actually quite diverse, there's a pretty broad spectrum of sounds and genres on here. The second track features a doom metal base, but makes use of an almost Iron Maiden-esque gallop before bringing in a more melodic sounding black metal riff. The vocals on here really stuck out however, you have the typical black metal shrieks, but the clean vocals are more processed and layered sounding, which sounds very unique. If you want a comparison to other groups, you could find a lot, from stuff like Enslaved to Alcest to Jesu, you have the progressive, the shoegaze, and the doomy stuff on here.
A good amount of these songs, the third and ninth tracks for example, that make use of the shoegaze melodies throughout their entire length, making these songs a lot more danceable and almost catchy. I'll mention that these melodies do appear in every track, at some point or another, throughout the entire album, and are used to great effect. Even on more black metal, aggressive, tracks like the sixth or seventh on here, there is still a great sense of melody driving each track from sounding like a hammer to the skull.
Overall, this was a very solid album, maybe not as consistent as I would have liked it to be, but still very good. I could see some people maybe being disappointed by this after the debut, but still give this a shot. On a side note, I, personally, really like both the cover of this and the debut album a lot. If you like experimental black metal, check this one out for sure.
Overall Score: 8
Highlights: Untitled 1, Untitled 5, Untitled 8
Posted by maskofgojira at 11:11 AM