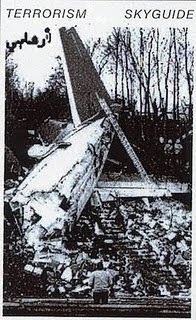 Terrorism is a US based black/noise metal group. This is their first demo and has actually managed to catch the underground blog worlds by storm. I recently discovered this demo tape and decided to give it a shot.
This album, stylistically, could best be described as a mix between black metal, grindcore, and noise music, all blended together into something very raw and distorted. I won't lie, a lot of what's on here is difficult to make out, I'm not even sure if there's even a guitar being used on here. The drums are very hot sounding, with the cymbals just ringing out and almost sounding distorted at times, which goes in hand with the harsh underbelly of noise that flows through each of these tracks. The vocals on the other hand have a very realistic scream vibe to them, not like a black metal scream, but someone taking a mic and just screaming their guts out.
Of the four songs on here, two are under two minutes, with the other two both being over five minutes, all of which are also untitled. Most of these tracks can kind of come together to sound like noise, if that wasn't the intention, when they're played together, which kind of made this a different experience for me. I found that between the first two songs and the second two, there was a shift in performance. The first two tracks featured a grinding assault that was relentless and disorienting, the second half started similarly but then went into a slower section where tension was just building up throughout the entirety of the track.
Overall, I'd say this was a decent demo, I'd like to hear this maybe get a bit more atmospheric just to kind of find something behind walls of noise, but for noise it's pretty good. I can't say that I was overly impressed by this, but I did enjoy it. If you like raw sounding, very harsh sounding noise/black metal, then definitely look out for this.
Overall Score: 6
Highlights: Untitled 4
Posted by maskofgojira at 11:45 AM