Darkenhöld - A Passage to The Towers... 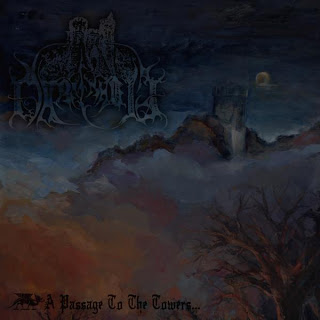 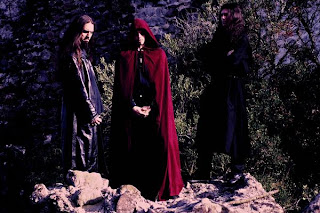 Darkenhöld is a black metal group from France. The group has participated on two split releases as well as a tribute compilation to Emperor, which is where I found the band originally. This is the full-length debut and stays true to that old-school melodic black metal sound while adding in a few of their own traits as well.
As the above statement says, this band play a melodic black metal in the vein of what bands like Emperor and Dissection were doing early in their career, maybe not as unique as they were, but to a similar degree of effect. High speed tremolo picking, shrieked vocals, and bombastic drumming are essentially the main sort of instrumentation on here, not really all that groundbreaking, but these guys manage to do what they do well enough to make it effective. I don't think that there's a lot on here that should surprise fans of the black metal genre, as it's not the style of this band has been done before, many times and probably been bettered and mastered by others, but these guys certainly have a good grasp at what they're doing to make it sound better than most, the title-track Darkenhöld.
This band, like the groups mentioned above, have a good sense to include riffs that are melodic enough to get stuck in your head, whether purposeful or not, are actually quite catchy. Besides that, the presence of keyboards is present on here as well, adding ambient noises and backgrounds to these tracks, and occasionally giving it that more epic feel without being overly cheesy or symphonic sounding, hear Citadel of Obsidian Slumber. The combination of the two, melodic riffs with the more atmospheric keyboard presence adds up to what could be seen as an Emperor clone, hence their cover, but I don't think the idea here is to be original just yet. The sheer presence of some of these songs should be strong enough to win over a solid fanbase while a more original sound is developed.
There are glimpses at what could definitely be seen as a look into a future direction, tracks like Crimson Legions features a nice transition from black metal riffing into it's more folk inspired outro section which features acoustic guitars and chanting. While most of this album could definitely be a look into the past at what the black metal elite, per se, were doing back in their prime, this record manages to pull away from being a simple clone of the past. While I can't say that this is the most original sounding record to come out, like I've stated over the course of this review, these guys play this well and pull it off better than a lot of their contemporaries.
Overall I have to say that this album did not let me down, I was impressed by the group's growth from their splits to this album. The sound of the band has definitely grown and been pushed to the next level. If you like melodic black metal, and to an extent, old-school black metal, definitely check this album out.
Overall Score: 7.5
Highlights: Ghouls and The Tower, Chains of The Wyvern Shelter, Crimson Legions
Posted by maskofgojira at 7:44 AM