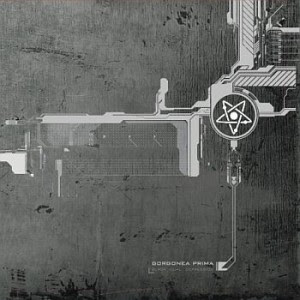 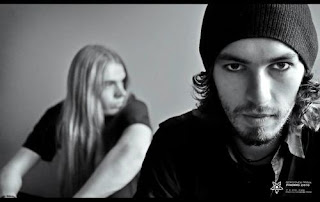 No Industry, No Society, All Metal.

Gorgonea Prima is an industrial black metal duo from the Czech Republic. This is their first full-length album, following up a pretty well received debut EP back in 2008. This album, as far as I know, is pretty under the radar, so hopefully this gets the word out.
Right off the bat, this duo show that they have no intention of trying to hide their electronic influences. Daylight Pollution opens with a black metal riff with pounding electronic beats underneath it and goes into a synthesized vocal part, then they go a bit more black metal. Obviously, if you're not a fan of overly synthetic sounding music, chances are you're not going to get into this record too much. Even if you consider yourself a fairly open-minded person, this album has enough shifts in dynamic and sound to get you scratching your head a few times.
Besides what could be considered a fairly typical sort of black metal sound for that area of the world, buzzing guitars, wretched vocals, and a fairly non-stop, always moving sound that at times could be a bit too linear for some, me, but still appeal to others, you have multiple electronic influences weaving their way in and out of this record. The more industrial elements come from the overall atmosphere that this record contains, as it feels like it's coated in a very pristine environment from the future and some of the guitars can occasionally get that sort of vibe as well throughout this record. Other influences appear to include trance music, symphonic black metal, glitch music, and a bit of ambient music as well. At times, I won't lie, some of these influences do overpower what's actually happening, electronics come to the top of the mix and end up sounding louder than the guitars.
At times, and this could be a problem with a lot of people, this record can prove to be dancy, hear a track like Biomechanic Soul. There are more than a few songs that utilize a more dancy and beat oriented sound rather than pounding rhythms, the more electronic sounding drums doesn't really help much either. Some of these tracks are honestly just not as aggressive as I think they needed to be, in my opinion, and thus hurts the record as a whole. I think the main problem however is just a lack of any real interesting arrangements on here, I found some of the songwriting to be lackluster overall, which kind of disappointed me.
Overall, this was an alright release, by no means terrible, but not great either. This will definitely appeal to people that have a higher tolerance for electronic music more so than metal, but it's probably a solid amount of both. If you like industrial, or electronic, tinged black metal, definitely check these guys out.
Overall Score: 6
Highlights: Blast Fournace, Eclipsed By The Sun, Digital Desire
Posted by maskofgojira at 7:32 AM