Severed Crotch - The Nature of Entropy 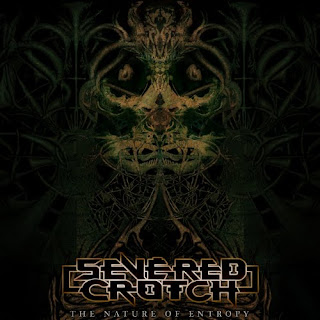 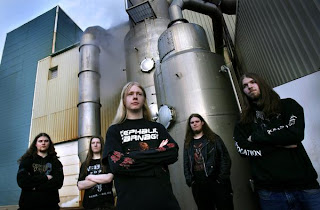 Not The Most Pleasant Name.

Severed Crotch is a technical death metal group from Iceland. This is the group's debut full-length following several high profile demos in the last few years. They have been praised for their live performances and songwriting abilities thus far.
After the instrumental opener, Precursor to Entropy, which is actually pretty good, Breeding Failure actually opens pretty mid-tempo. I had expected to be kicked in the teeth by the opening track, but instead, it opens a bit slower, and then goes all technical and crazy on you. As the album progresses, it becomes apparent that these guys don't sound the same as every other tech-death metal band, but are actually quite different.
Style wise, I was surprised to hear this band mellow out on more than one occasion, and while none of them was very long, it was surprising none the less. There is also a major influence of what could either be sludge or doom on here, as the band slow down from blasting several times throughout the course of this record. Besides their technical demonstrations, there's also a heavy influence of brutal death metal on here as well, especially in the vocals, where they're low and guttural for the most part. With all these different, what might be, influences, this album is very diverse and sounds a lot different than their contemporaries within their scene. These guys have a good sense of when to get brutal and slow, when to inject some melody into their songs, when to get into a solid groove, and when to show off.
It actually isn't until track seven, A Breath of Hatred, when the band go into full-on tech-death mode. When the band do go tech-death, it's actually interesting, because this entire record doesn't so much blast as much as it grinds, and not in the traditional sense, I just couldn't find the right word. This album shifts tempos a lot, from full-on blast-beats into slower more groovy stuff at the drop of a hat.
Overall, I'd have to say that this is easily one of the most original sounding death metal albums to come out this year, along with that Stargazer album. This is extremely mature for a debut album, and hopefully the band can only get better here on in. If you like death metal, not deathcore, check this out.
Overall Score: 8.5
Highlights: Ecstasy In Death, XII, The Nature of Infidelity
Posted by maskofgojira at 11:36 AM