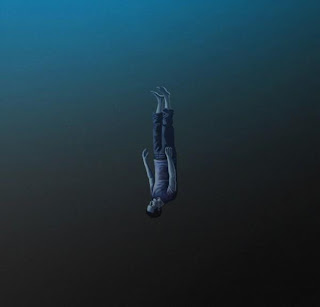 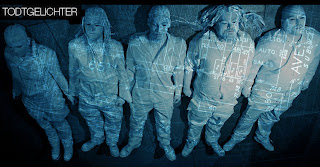 A Birth, A Death, A Rebirth.

Todtgelichter is a progressive black metal group from Germany. This is their third full-length and the first to feature former bassist Nils on lead vocals after former vocalist Mort left. This album takes the band's sound into many new directions after their last album gained them a wider fanbase.
This is my first full-length experience with Todtgelichter, and I say that I only became interested in them after seeing the cover of this album, a few months before it was released. I thought that this album cover stood out among all the other black metal covers, it didn't look like any other band. After listening to this album, and a little bit of their back catalog, I can safely say that this band has totally won me over, it gave me something different than what I was expecting.
2007's "Schemen" was an album that took the group's more atmospheric black metal roots and began to integrate more experimental and progressive elements into it. Three years later and the band have expanded their sound to fully embrace elements of progressive and melodic elements. Songs are no longer bound to the aesthetic of heavy atmosphere and tremolo picking, on here melodic choruses, that have clean vocals by the way, softer passages, and longer, more adventurous songs, most range in the seven to eight minutes on this album. The thing that makes the album great is not the lengths, but what goes on in the tracks, there's enough going on in each track to keep it interesting and worthwhile to listen through.
The album opens with some of the more aggressive tracks, but the third track, Oblivion, really stood out, with it's more progressive doom style, and the album only continues to progress in originality as you go deeper in. This song in particular, however, manages to channel sounds of early Black Sabbath as well as go into an almost Pink Floyd-esque guitar solo, really just blowing my mind. Essentially, this is a modern progressive black metal album, it manages to combine styles from many different sub-genres and pull them off fantastically. The more blackgaze sound of Neon recalls elements present on the album of the same name from Lantlôs or Alcest.
Overall, I think it's a shame that I listened to this album so late in the game, as this is what I like to hear from a black metal album. It has everything I want from the genre's more experimental side, progression, melody, experimentation, unique sounds, it's all here. If you like progressive extreme music, definitely get this one.
Overall Score: 9.5
Highlights: Every Track Is A Highlight
Posted by maskofgojira at 12:14 PM