Vestiges - The Descent of Man 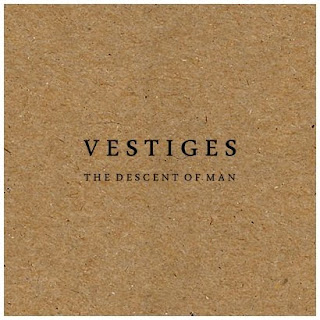 It's A Fall, Not A Descent.

Vestiges are a blackened hardcore/screamo outfit from Washington. The band originally formed to create music that was influenced by black metal, post-rock, hardcore, and screamo music, but turned out to create one of the underground's most praised albums this year. I've had this one for a while, and of course I'm just now getting to it.
As a record that's meant for every track to flow together in sequence, this album really does become more and more interesting and interesting as it progresses. Starting off with a slow building Intro with a more post-rock, clean guitar based style, then just bursting into heavy riffing on I. You'll find a lot of climbs and falls on this record where it does hark back to post-metal at times, but never really sounds like post-metal. This is all very well done over the course of these seven songs, as it never really repeats itself within any section.
There's a lot of variation on here, yet it always sounds very natural, it's very fluid sounding. The aforementioned I has a bit more of a sludgy vibe to it while II is much more black metal influenced, yet the two sound like they belong side by side on here. The hardcore element doesn't shine through on here as clearly as I thought it would, but when it does shine through, IV, it has everything I expect it should, pouning rhythms and thrashy sounding riffs. There are still quite a bit of more quiet and somber parts on this album as well, making those climbs so much more effective.
These guys are very compotent songwriters, being able to combine genres is something, sadly, even more seasoned artists fail at, but these guys do it exelently. The fusion of styles here is well done, and sounds very much like the band's own sound is being formed, it's aggressive, but it's not going to beat you over the head, taking enough time to slow down and let you catch your breath. This is an album that really shows a lot of potential.
Overall, I'd have to say that I really enjoyed this album, not that I ever doubted that I wouldn't. These guys definitely have a bright future in store for them if they continue making records like this. Definitely check this out if you haven't already looked into it.
Overall Score: 8.5
Highlights: I, II, IV
Posted by maskofgojira at 10:28 AM