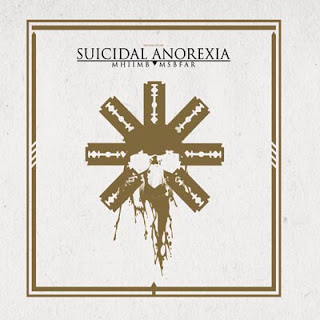 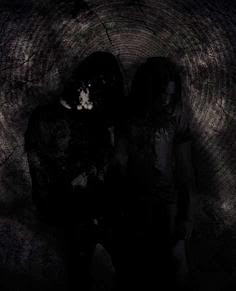 No Slit Wrists, No Black Artwork, But You Can Guess By The Title.

Suicidal Anorexia is a depressive/atmospheric black metal duo from Mexico. This album follows a short split EP that released earlier this year with Unending Hatred and Have A Nice Day. I'll be up front and say that the only reason I'm reviewing this is because of the cover, it looks different from other groups/projects in the scene.
Coming from someone that's listened to quite bit of this stuff this year, I'll admit I don't know it all, that this genre can be a bit tiring if it's done poorly, and in a good amount of cases, it is. I find most records within this genre, excluding it's originators and a few newer acts, most groups sound like piss-poor imitations of the originators, only with less emotional shock present in their music. By emotional shock, I mean that when you listen to founders of the genre like Silencer, Hypothermia, or even Lifelover, you can get a shiver down your spine by how much raw feeling is being pushed into the music and the screaming. I can't say that this duo is an exception from all the cliches that this genre holds, but at least their doing something that sounds better than their contemporaries.
Besides the initial cover design that attracted me to this, what made me keep it was that this duo doesn't rely solely on repetitive droning patterns to make their music sound depressive, if anything, this album is one of the most experimental albums I've heard from this scene. While the opener Fragility is completely monotonous and indistinguishable from other groups, the second track, My Eternal Asphyxia, combines that same vibe with what appears to be a symphonic black metal sound. However it's not just that, there are other sounds on here, such as more ambient and atmospheric soundscapes that lurk behind more melancholic instrumentation, or even the blackgaze melodies on Restos De Culpa. Overall, I'd say this is actually one of the more aggressive and unique sounding depressive bands.
However, this album is not completely devoid of it's depressive chains, the vocalist on here shrieks and moans like many others do within the genre, often making him sound very fake in comparison to others. With that being said, I did find that there were instances on here where he surprised me, like the very primal roars on Palabras Sin Aliento or the hoarseness in his voice near the end of And My Body Will Melt Into The Black Earth. I also found some of his vocals to kind of fall randomly in the mix at times, often either coming above everything, or going below it, which made for an odd experience. On a side note, there are also some quite odd samples on this album, everything from police sirens to rain and some odd talking in another language.
Overall, while I can't say that this is the best album from this scene to come out this year, I really don't know what would be, this is certainly a very ambitious release. I'd like to see this band either expand their sound even further or try to mix the sounds on this album together a bit more fluidly on the next album. If you like depressive metal that is actually unique, give this album a chance.
Overall Score: 8
Highlights: Open Your Veins (Open Your Veins, Free Your Soul From This Mortal Coil), And My Body Will Melt Into The Black Earth, I Wounder If The Rope Still Hanging From The Tree That I Am Following With This Suicidal Wings
Posted by maskofgojira at 9:57 AM