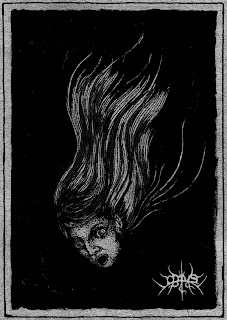 Yes, once again we have an account of me checking out a band solely based on their cover, which I thought was really cool. Sunyata really didn't give out a whole lot of information about this release when I bought it so it's kind of making it's rounds as of right now. Two songs that appear to be getting more than a few people's heads turning makes it look like I made the right choice picking this up.
What can you say about this two song demo. I guess the best place to start would be that it's incredibly short, with the whole thing totaling up to around seven minutes. With that out of the way, I can speak of the music, which I can almost guarantee will please fans of the atmospheric black metal sub-genre. While sonically, I would call it a bit cleaner sounding than some other groups, it remains pretty true to what groups like Trist, from Germany, and Orrery might sound like with clearer production. I should say that there are traces of blackgaze/post-black metal in here as well. It shouldn't be enough to really put the band into that sub-genre, but the guitar tone definitely does recall a bit of the sound that is found in many of those groups.
It is, in the end, a rather enjoyable piece that is well worth checking out if you're into this sort of thing. It's not long at all, so even if you just give it a once through, you're not losing much time. I recommend this tape to anyone that enjoys more atmospheric based black metal.
Overall Score: 6
Highlights: Selfless
Posted by maskofgojira at 10:00 AM