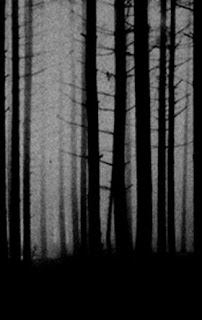 If you had asked me last year if I would have listened to something that was tagged as "raw black metal", I would have told you no. So it's a bit odd, to me, that not even a year later, because I've been exploring bands with that tag for a couple of months at this point, I would find it not only tolerable, but enjoyable. This demo is one of those bands that a year ago I wouldn't have touched.
I should make it clear that despite this album being very much within the realm of black metal, the noise element is just as prominent within this tape. Below the screeching of scathing feedback lies the mid-paced blackened punk that I assume will be the draw for most people. I have to say that the riffing, while not overly ambitious or original, is still very memorable due to a more straight-ahead and simplistic approach. While the noise and feedback is at the forefront of this release, it's not so piercing that if you just started listening to the black metal side of the band, you could actually forget it was there, as I found on a track like Obsidian Shrine for example, but it could be applied to pretty much the entire album. This isn't a wholly intense record though, there are moments of more somber drones that are spread throughout the entire release, whether it be the intro Obituary or the closing of Vortex Toward Evil, it's an interesting mixture that does fit the band and doesn't really feel out of place.
I think it's a pretty promising start to a band that could prove to release something really good down the road. It might be a little tough for some people to swallow, but I feel that it is certainly worth listening to. It's a very strong demo of harsh and raw blackened punk that I suggest you look into if that's your sort of thing.
Overall Score: 5.5
Highlights: Vortex Toward Evil, Inside The Ritual Circle
Posted by maskofgojira at 11:44 AM