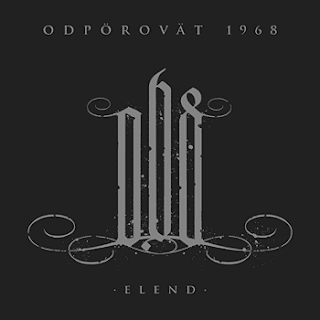 Let's talk about some doom that I'm really late on covering. Back when this was originally released it got quite a bit of good press, and I remember listening to a couple of tracks back then and then just sort of moving onto other things. Here's me making up for letting this album slip through the cracks.
It has to be said that unlike the last few years, this year has had quite a few very good doom records. A lot of the records to come from the doom metal genre, that I've heard this year have had some excellent songwriting and musicianship on them as well as containing interesting deviations from the regular and straightforward approach that you'll find in most records in the genre. O.68's debut full-length proves to follow along with that trend by releasing an album with no guitar, which means that the lead instrument on here is bass. I know that the idea of bass being the lead instrument for an album might not sound too appealing to you, but I'll tell you right now that it does work. What makes it stand out from being an album with lots and lots of low-end is the fact that on here, not only is bass used as a leading instrument, but it also provides additional help in providing soundscapes to these songs. Whether it be through drones or just heavily processed effects, you find that it's the type of album that can change your perception on an instrument.
Despite being a doom metal record, one of the things that makes this record stand out among other doom metal albums, not just this year, but really within the last several years, is the diversity in it. Coming in knowing that this is a doom metal record could possibly be the best way to approach this record because you will get various sub-genres explored on here. Whether it be the funeral doom inspired opening of Mournau or the more traditional sounding and mid-paced doom of Abkehr, there is more variety on here than one might expect coming into a doom release. I did find the bluesy nature of some of these songs, Mother of Negation for instance, to be quite interesting due to a riff being played on the bass did bring a different sort of vibe to an otherwise standard blues kind of riff. I have to be forthcoming with you and say that the first couple of times I listened to this album, I found it extremely boring, I still find the opener to be a bit too long for me, but the more you listen to this, the more it starts to grow on you. I would love to hear the project write songs that either express a more experimental side, like the last track, The Lowest Day, or put out more catchy material in shorter lengths because I feel that this project can do both very well and I think in the future, these features will only be strengthened further.
I think it's a very solid slab of doom that definitely sticks it to a lot of purists who think that bass can't lead a project like this successfully. I doubt that this is going to change someone's view on doom but it's certainly an album that should not be ignored. It's not perfect, but I think that if you're a doom metal fan, this is a record you should definitely check out and add to your catalog.
Overall Score: 8
Highlights: Abkehr, Mother of Negation, Mortal
Posted by maskofgojira at 8:54 AM