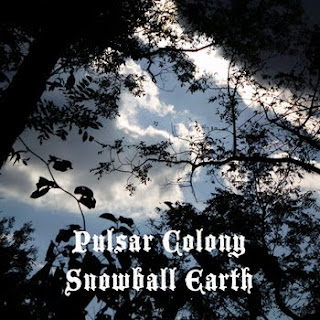 I'm a big fan of nature photographs, thus, when they're used for album covers, I'm naturally at least very impressed with that aspect of a group. While they certainly don't have to be the be-all and end-all of album covers, obviously, I do find them to especially appeal to me. When I saw this album cover, I immediately thought of Njiqahdda.
I can say the when I just skimmed through the album, before actually listening to it once, as I usually do with most albums, I could tell that this was going to be a really interesting album. There's a lot of different ideas on here that I immediately knew would appeal to me. Stylistically, this record makes use of a lot of different ideas. Throughout the album you'll hear traces of some of their influences, Enslaved and Alcest come through quite clearly, Calypso clearly nods it's head to those bands, while the Tool, Opeth, Mastodon, and Emperor influences are more fleeting in their appearance. The longer songs, the shortest of which proves to still be just over eight and a half minutes long, are actually justified with various trips into interesting patterns and riffs, thus creating a song that is not boring, though it wouldn't have hurt if a couple of tracks were just a bit shorter as some ideas due tend to run on for a bit too long. The entire album also could have been shortened as well, being nearly eighty minute in total, it is a tough one to listen to all the way though, though it is not without it's rewards.
I think one of the most intriguing aspects to this record is the drum programming, which does not simply make use of a "traditional" sounding kit. Throughout the record you'll certainly hear all manner of percussive drums, from those found on a drum kit to hand percussion. Granted, the setback of that effect does lead to a very mechanical sound that makes it easy to tell that it is a drum-machine. I also think that the keyboards used throughout the album give it a very unique feel as well, at times bringing in an almost new wave kind of vibe to a couple of tracks. They shift between simply providing atmosphere and lurking beneath the guitars to providing an actual melody, Absolute Zero for instance. I'm also quite partial to the bass work on here, as it's always audible, but often sounds like it was performed acoustically, but that may just be me. What may intrigue people is that while elements of this album certainly fall into the whole post-black metal sub-genre, the Alcest element where you have intense black metal parts that fall into softer post-rock and shoegaze parts is not really as limiting as it might appear, on here anyway. Instead of falling into those genres, when this thing goes soft, you get a bunch of different ideas ranging from sitar and bass solos to sections that recall more of a psychedelic folk kind of sound.
By the end of it, I was very impressed with the songs and ideas on here and I look forward to seeing what Charles Sabo does with the project next. I don't see any reason why you wouldn't like this album if you like forward thinking black metal groups. Definitely check it out if you want to hear some pretty cool experimental black metal.
Overall Score: 8.5
Highlights: Wounded Animal of The Four Elements, Pillars of Creation, Of Frostfang Origin
Posted by maskofgojira at 9:42 AM