Antediluvian - Through the Cervix of Hawaah (2011) 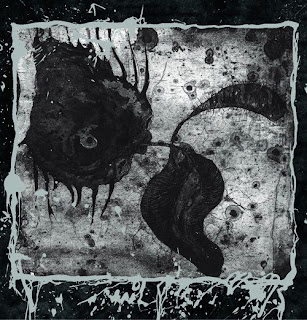 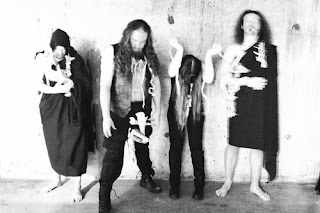 I'll come out and say that death metal has had a much better year than I had thought. Early on this year, I had imagined it was going to go similarly to last year, which had very few death metal releases that stood out to me, but this year has been very good. This album is one that I've been anticipating since I first heard they had been signed to Profound Lore.
Never one to release a normal sounding band, Profound Lore have once again released an album for a band that sits somewhere comfortably, if not unstably, between the realms of death, black, and doom metal. Antediluvian is one of those bands that sounds like members of Incantation, Morbid Angel, and Immolation all decided to jam together while on an acid trip. It's one of those weird sounds that isn't boundary pushing but molding. It's as if the band knew what they wanted to accomplish sonically and just sort of wrote songs that weren't so specific to a single sound and they wound up with these eerie and brooding extreme metal tracks. In addition to that, the weird vocals kind of add a bit of a psychedelic vibe to a couple of these songs, and I don't mean the growling, there are some pretty trippy moans and throat chanting going on in a couple of songs, hear Luminous Harvest for one example. At times the band also pull out some more psychedelic riffs that only enhance the oddity that is this record. With all that being said, don't mistake this record for being progressive, because it is has a lot more in common with primal and bestial urges than technical and sophisticated precision.
It's the type of sound that wouldn't sound nearly as powerful if not for it's deep and cavernous atmosphere. To be completely honest, the first two listens through this thing were a bit rough because the production does get a little muddy at times and riffs can tend to bleed into one another. With every consecutive listen through though, riffs begin to stand out more and more, they become more distinguishable from the muddy production, tracks like Scions of Ha Nachash (Sceptre of The Burning Valley) stick out as being one of the ones that hit me after a couple of listens as being a really good song. I should say that while I'm describing the production as muddy, it's not terrible and it suits the sound of the band. Personally, I might have wished for the album to kind of break itself up a bit more, as I found that picking some tracks apart from each other was a bit of a difficult task at times, more so in the middle of the album than during it's bookends.
It's a very solid piece of work that definitely cements it as another stand out death metal album for 2011. I definitely could see this record appealing to both old-school death metal fans as well as people who are more interested in the more avant-garde take of bands like Portal. Do yourself a favor and look into this record if you're a fan of extreme metal.
Overall Score: 8.5
Highlights: Intuitus Mortuus, From Seraphic Embrace, Erect Relfecion (Abyss of Organic Matter)
Posted by maskofgojira at 11:55 AM