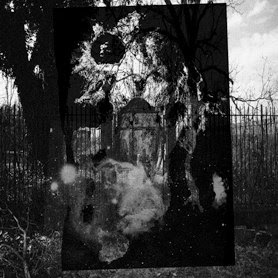 Around this time last year I covered the split between Altars and Halla, so it's only appropriate that I cover this new release from them. Yet another awesome release from Triangulum Ignis, quickly becoming one of the better labels covering underground experimental black metal. Along with their first full-length earlier this year, this second album proves to be more of a summation of the year.
Let's just set this straight, I'm up for any new releases from Altars, because they're a great band, but I'm not really sure why this exists. This three track affair features two tracks that have already been released, The Slain God on their first full-length, "Live On Pure Hate," earlier this year and Serment De Sang from their split with Hella. I don't mean to hate on the songs themselves, because pretty much like everything else the band has released, it's of a high quality, I'm just not sure why we need a compilation of this nature. Both songs are quite melodic, by the band's standards, and the band pump out some pretty memorable riffs in both songs. The third track, Something In The Way, is a Nirvana cover that's pretty good, not as good as their Swans cover, but still worth hearing. This track in particular continues the band's recent trek into doom metal with slower overall speed and more a much more dreary atmosphere than any of their past material. By the way, just as a side note, the entire length of this release is just under fifteen minutes, so it is one of the band's longer recordings.
It's a good release from a good band, and shows that Triangulum Ignis do have their ear to the underground and have a good intuition when it comes to releasing good material, I'm just not sure why this release was necessary. I don't cover compilations, and this is one of the few instances I'm doing so because I missed the boat when it came to their debut earlier this year. If you want to hear some great, aggressive black metal, definitely check out Altars in any form.
Overall Score: 8
Highlights: Something In The Way
Posted by maskofgojira at 10:56 AM