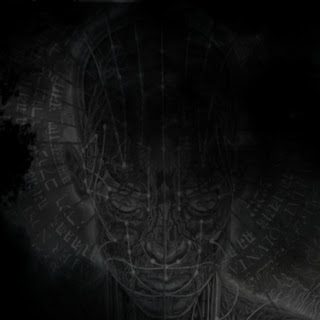 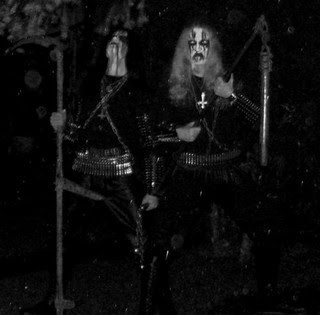 I was really surprised when I saw that Carcharoth Λ.V. had an album out this late in the year. I am, and have been a fan, for a little while but I guess I'd be surprised by any album that's released this late in the year. Whatever the case, it's great to hear new material from these guys no matter when it's being released.
I should warn you before you come into this album, this is a long album, it's nearly the full eighty minutes long. I know I've covered double-albums that have topped this in length, none of those albums was ever filled to the brim with music, you could listen to about an hour, and maybe take a break or whatever and come back to it, this was one album that's just completely full. Beyond that, these guys, much like their brothers from Switzerland, Darkspace, focus on creating huge pieces of atmosphere that is all encompassing in size, mass, and sound. I have, in the past, referred to this duo as the more scrappy little brother to Darkspace, due to their sounds being relatively similar, but much more raw and, in a sense, personal. From what I understand, I believe that this album is somewhat conceptually based on black holes, or at least inspired by them, which is an interesting idea. I do have to say that the samples on here range from unintelligible to really good, with the best being found in the title-track, Transcendvm Monolitvs Xvl, referencing vampirism as well as soul transmigration and death, it's actually pretty cool.
I have to be honest, when you listen to an album like this, remembering songs really won't happen. There really isn't a whole lot in the way of catchy riffs, memorable hooks, or engaging interplay, this is a very cold, bleak, and chaotic album. It's almost all about the atmosphere, making this sound absolutely gigantic and monstrous. In fact, the most memorable thing about this record is the atmosphere, and it's really more subjective if that's what you would term as "memorable." It's records like this that aren't about each individual part so much as the whole they create when they're all together. There's almost an industrial vibe to how the drums are played, or rather programmed I think, because of the tone of them and how they're used more to accent certain sections of the music rather than others. Other times it comes from all the reverb on here, where certain guitars just seem to be locked into a cacophonous state of echo that it creates an almost industrial kind of noise. A lot of this album appears to have been written in spurts if only because of shifts where one thing will be playing out and then cuts to another section completely, which is a bit off-putting when you realize you're really engrossed in a section and then it just stops.
For all it's flaws, I still really enjoyed most of the album and thought it's ideas were interesting. This is the best release from the duo thus far so this would be the best record to start with from them, if you plan on doing so. Check it out if huge, cosmic, atmospheric black metal is up your alley.
Overall Score: 8
Highlights: Astral Projection OJ 287, Silentivm Vltima NGC 6240, Viator Vacvitas 777
Posted by maskofgojira at 11:14 AM