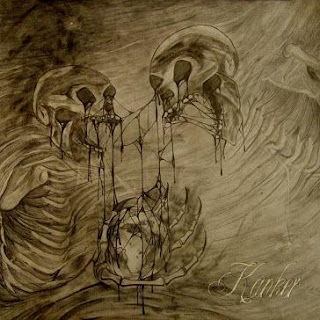 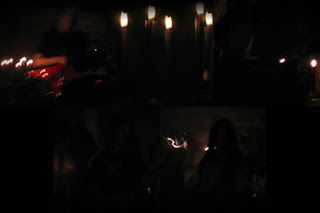 I have to be honest and say that I had never heard of this band before being sent this album. Upon looking them up I found a band that was being called depressive which seemed pretty odd to me. I was very interested in this album which I hadn't seen all that much about, and apparently there isn't much out there about it.
Like I just mentioned above, I found it hard when I first skimmed through the album to find any traces that would allow this to be labeled as depressive. The four tracks that make up this album bring a lot to the table actually, and the qualities found within that sub-genre are few and far between on here. There's a lot of atmospheric qualities found in here, but I also found a lot of progressive and doom influences as well. It's quite the abstract little piece because these songs are far from being "regular" black metal songs and express some quite odd and avant-garde tendencies. A lot of the riffing is not typical of black metal, at times calling more into a doomier vibe while not really conforming to that style either, listen to Als Sneeuw Voor De Zon and hopefully I described that well enough. There are moments on here where things do get melancholic, but I'd say that those moments still have more in common with doom than any sort of depressive kind of comparison.
These guys do a great job, in my opinion, of creating quite a weird sounding ambiance. Through all the odd riffs and melodies used on here, as well as the keyboards, you get a very different sounding atmosphere than one might expect. In my head, there are moments, in the background atmospheres, where I kind of get a Nachtmystium kind of vibe, where it's sort of psychedelic and trippy, but very dark and hazy. The ideas present on here are the types of ideas I think more bands should start to include because there are several moments that break away from metal and seem to go off into almost improvisation and flights of fancy. Along with that, I have to say that the production does this album a lot of justice as well because every player can be heard and there are sections where it seems like every player just starts doing whatever they want but it all comes together on point. Album closer Artificiality is probably the easiest track to digest because it is the most melodic while still retaining a lot of the unique characteristics the band expressed throughout the rest of the album. In all honesty, there wasn't a dull moment on here.
I didn't know what to expect coming into this album, but by the end of it I was thoroughly impressed with it. It's a relatively short album but each song covers a lot of ground so it never gets boring in the least. Definitely check this out if you haven't yet, this is really cool experimental black metal.
Overall Score: 9.5
Highlights: Every Track Is A Highlight
Posted by maskofgojira at 9:39 AM